The shows must go on - and on

After 40 years of ups and downs, Roomful of Blues keeps on rolling 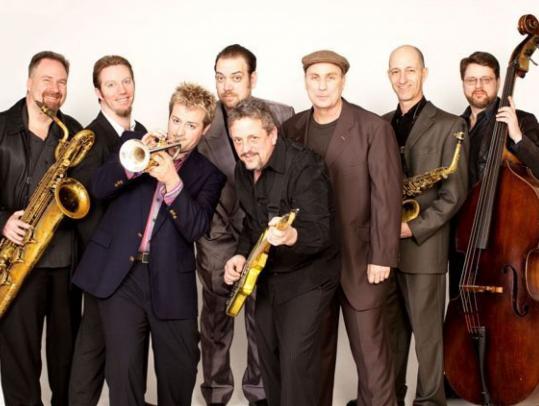 “It’s been thousands of shows for me - I can’t remember how many,’’ says Chris Vachon (center), whose band comes to the Regattabar tonight for a pair of shows.
By Jonathan Perry Globe Correspondent / October 16, 2009

With a prolific 40-year history and an alumni roster that numbers more than four dozen musicians, Rhode Island’s Roomful of Blues certainly has lived up to its capacious name.

That this New England institution is a big band with a robust sound comes as no surprise. But the body of evidence that suggests the eight-piece band might be a force of nature bigger than any of its members past, present, or future is something bandleader and guitarist Chris Vachon never counted on when he joined as the new guy. That was two decades ago.

“It’s been thousands of shows for me - I can’t remember how many,’’ says Vachon, 52, who’ll bring Roomful to the Regattabar tonight for a pair of shows celebrating the band’s 40th anniversary. “We’ve been everywhere. And for the most part, it’s been a lot of fun. Every once in a while, the rough spots happen where the bus will break down, but those are few and far between.’’

Roomful has enjoyed its share of the ups (Grammy nominations, backing Stevie Ray Vaughan at Carnegie Hall) and endured its share of downs (the deaths of trumpeter Bob Enos and trombonist Porky Cohen). But through it all - shifting musical trends, fads, and popular tastes - Roomful has never stopped performing. At this stage of the game, you get the sense that the longer they last, the less likely they are to stop.

“I’ve always wanted to keep going for a couple of reasons,’’ Vachon says by phone from his home in Rhode Island, where he grew up. “One, it’s a great band, and I’ve always enjoyed playing in it. And number two: the band’s history. I think I would feel bad if it just went down after all this time. It has a life of its own at this point. That’s one of the reasons why, when things get really tough and sometimes you just want to leave the whole thing, you [realize] it’s almost like a duty to keep it going.’’

Like the band itself, Roomful’s blues legacy - in New England and beyond - looms large.

“For me, Roomful is a legacy act that keeps us in touch with a time when Boston was important in both the preservation and evolution of blues music,’’ says Mike Mellor, editor of the Boston Blues Society website (www.bostonblues.com). “The band has always been full of musician’s musicians, and they were pivotal on the scene when blues reemerged. Even if they didn’t get the mainstream attention like their peers, their influence was definitely felt. The Roomful guys were in there from the beginning, and the band is still kicking. It’s nice to see.’’

The group’s vast past membership includes cofounder and hotshot guitarist Duke Robillard (who was replaced by hotshot guitarist Ronnie Earl), singer-harpist Sugar Ray Norcia, and singer Lou Ann Barton. These days the longest tenured member is saxophonist Rich Lataille, who joined in 1970 and remains the core component of a three-piece horn section.

Lataille can’t believe he’s been in Roomful this long. “I remember being young and thinking, wow, when the century turns, I’m going to be 48,’’ says Lataille, who’ll turn 57 this month. He remembers being a fan and seeing a nascent Roomful of Blues perform as a stripped-down quartet, covering the likes of Muddy Waters and B.B. King.

The addition of horns broadened the band’s stylistic palette to include the 1940s and ’50s jump blues and brass-driven R&B of Big Joe Turner and Eddie “Cleanhead’’ Vinson, among others. In a sense, Roomful anticipated the swing revival that would become popular two decades later. That musical moment may have passed, but to Lataille, Roomful still feels fresh, and timeless.

“It’s still interesting to me,’’ he says. “And it becomes a new band when somebody new joins. They bring a new voice to the group that keeps the energy going.’’

More lineup changes are on the way. Singer Dave Howard plans to depart in a couple of months and will be replaced by Phil Pemberton. Meanwhile, new bassist John Turner has just entered the Roomful fold, replacing Bryan “Frankie’’ Rizzuto. The beat goes on.

“We mix everything up,’’ Vachon says. “It keeps us on our toes and gives us a better show. And getting on stage - that’s the fun part. You don’t think about what you’re getting paid. You play for the guys in the band, and you play for the audience.’’

Karen Nugent, president of the Boston Blues Society, says the band’s party-ready personality - not to mention blistering guitar and hot horns - is what keeps people coming back. “To me, they’re more of a swing/jump band,’’ Nugent says. “And because of that they attract a huge amount of people who like to dance. Have you ever been on a dance floor with some of those people? They’ll knock you over.’’

“I guess I’ll be doing it until I can’t get myself on the bus anymore,’’ says Vachon. “I’m sure there’s going to be a point where I’m going to have to pass the torch to somebody, but I hope it keeps going. I’d love to be 90 years old and see the band still playing out there. That would make me very proud.’’

As for Roomful’s long-term legacy? Vachon pauses and thinks about the thousands of shows its performed over the decades. “Even if we don’t ever get giant financial success - and we don’t even think about that - I think people who saw us are going to say, ‘Wow, those guys were a great band,’ ’’ Vachon says. “That would be enough for me. How much better can you have it?’’

THE ROOMFUL OF BLUES 40TH ANNIVERSARY TOUR At the Regattabar for two shows tonight, at 7:30 and 10. Tickets $20 at www.regattabarjazz.com.