No frills and down to earth, Clarkson plays it old school 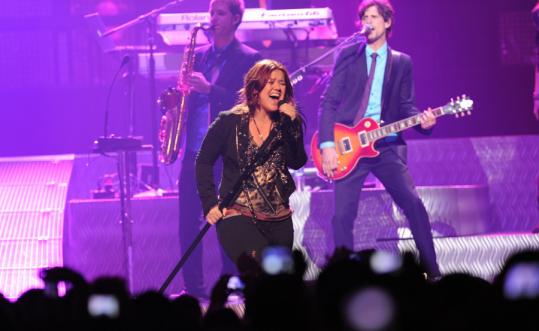 Kelly Clarkson is that rarest of television celebrity contestants: an artist blessed with a startlingly huge voice and more than a modicum of musical talent. When it came to getting a glimpse of the actual person behind the glossy persona during her 90-minute set Tuesday night at Agganis Arena, Clarkson’s candidly off-the-cuff, self-deprecating charm proved a powerful ally amid her arsenal of gifts.

The first “American Idol’’ winner has spent several years trying to avoid being relegated to just another corporate cream puff shilling someone else’s ideas. It’s debatable how much of Clarkson there is inside the hit-by-committee production that marks her latest album, “All I Ever Wanted’’ (and the strident blastoff of a song she opened with Tuesday). But her booming voice and down-to-earth personality quickly put to rest any doubts about her abilities.

Backed by a nine-piece band replete with horn section and a pair of background singers, Clarkson’s spare stage production - essentially flashing lights and strobes - put the emphasis squarely on the singer and musicians. The show was old school all the way, and it worked. How many 14-year-old girls do you know who wave their cellphones wildly to a saxophone solo? Or who appreciate the giddy glee of a Motown-by-way-of-Brill-Building rump-shaker like “I Want You’’?

The strutting, fuzz-funk buzz of “Miss Independent,’’ Clarkson’s best song, was a sassy statement of personal purpose. But there were others that showcased a versatile range of moods and colors. She imbued the dark heartbreak of “Never Again’’ with a husky, huge hurt, and later ventured to even darker territory on “Because of You.’’

Of course, the cult-of-Kelly singalongs were inevitable on junior high diary entries like “Behind These Hazel Eyes’’ and “Cry,’’ a schmaltzy, by-the-numbers ballad that Clarkson joked felt like her “Celine Dion ‘My Heart Will Go On’ number.’’ No matter how persuasively impassioned the voice, pedestrian pop hackwork is still pedestrian pop hackwork.

Clarkson’s taste in covers was more inspired. She delivered a searing reading of the Black Keys’ slow scorcher “Lies.’’ Nearly as good was her version of the White Stripes’ “Seven Nation Army,’’ reimagined as the soundtrack to a thumping house party writ large.

“New country’s great, but old country’s rad!’’ Clarkson said by way of introducing her take on Patsy Cline’s classic “Walkin’ After Midnight.’’ With her burnished alto gliding and strolling across the smooth-as-glass lilt of the song’s melody, Clarkson transported us all to the wee hours of a silky, starry night. And it was only 9:30 p.m.