Hingham company rents amps to zithers for players of all sorts 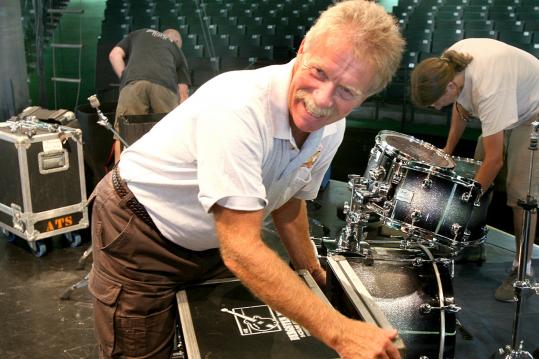 HINGHAM - Inside a warehouse tucked at the back of a nondescript Hingham office park, more than 200 keyboards are lined up on shelves, miles of cable are neatly coiled, hundreds of snare drums and complete drum kits are packed in road cases to go, and dozens of guitar cabinets, DJ gear, microphones, mixing consoles, music stands, and even lighting equipment stand ready for any musical situation.

This is Bergsten Music, which, during the last 30 years, has become New England’s largest backline and pro audio rental service, taking care of everyone from the Boston Pops Fourth of July show this year with Neil Diamond and last year, Rascal Flatts - to private parties and college festivals.

It’s quiet around midday early in the week, but owner Andy Bergsten says it won’t be for long. He points to the organized piles of equipment stacked near the loading dock.

“These are for upcoming gigs,’’ he said, “including an industrial event in Rhode Island, a B.B. King performance at the South Shore Music Circus, and some events at the Pavilion and Center. We’ve also rented equipment for several private parties where the Beach Boys were performing.’’

Included in the equipment for B.B. King are not one but two Hammond B-3 organs, and four vintage Leslie speaker cabinets that go with them. “One of the reasons people call us is they know we have an inventory that’s extensive enough to include backup equipment if there’s any problem,’’ Bergsten said. “When you’re performing live, you have to be ready for anything.’’

He should know: He’s a bass player who has worked with many bands over the years and has been active with the Grammy-nominated Bellevue Cadillac, which specializes in jazz, gospel, blues, and swing.

“It’s good to be out there playing,’’ he said, “because you see what other people are using and stay connected.’’

Playing out in bands is what got Bergsten started in the rental business back in the ’60s. “My dad told me I’d have much more control over the situation if I had my own P.A.,’’ he said. “When my band opened for Van Morrison on a few dates in 1968, I was able to rent him some of the equipment they didn’t carry on the road.’’

Over the years, one connection built on another, until his company grew into the 12,000-square-foot space he now occupies.

“I started by storing equipment in my backyard shed,’’ said Bergsten. “There was enough room for the lawn mower and a couple of P.A.s and guitar amps.’’

Tim McKenna, production manager for the Comcast Center in Mansfield and the House of Blues in Boston, said he has worked with Bergsten Music in one way or another since 1984. “There are a lot of variables in getting a performer in and set up on time for an event,’’ he said. “I’m happy to have Bergsten Music on the case because that means there’s one less thing I have to worry about.’’

While his company grew, Bergsten, a graduate of Berklee College of Music, kept his day job as an elementary music teacher in the Plym outh public schools, retiring four years ago to devote himself to the business full time.

“It was a little crazy,’’ he said. “After school I’d rush home and help prepare gear for gigs.’’ Sitting in his spacious office, dominated by photos of Bergsten with musicians, including Paul McCartney, Les Paul, Arlo Guthrie, and John Williams, Bergsten is quick to credit his longtime vice president and general manager, Greg Borsari, and his full-time staff of 12, with helping to build the company.

“A lot of my competitors started small, the way I did,’’ he said. “But you have to learn to delegate and give opportunities to other people. We wouldn’t be where we are if it weren’t for Greg and the team.’’

As the company built its reputation and its equipment inventory grew, Bergsten’s rental work expanded to the current schedule of between 150 and 170 shows each month. On a typical day, a call will come in from a tour manager or venue production manager with the band’s rider, who is sort of like the group’s butler, detailing all of the performer’s needs.

“Musicians are very particular about their sound,’’ said Bergsten. “They want specific drum heads, amps, and strings. We take the worry out of it by making sure we cover every base.’’

Covering the bases means being prepared for any eventuality. “Equipment doesn’t always work, for one reason or another,’’ said McKenna, “but not only does Bergsten Music carry a backup on the truck, saving the time to get a spare, but his technicians are very knowledgeable about the equipment and can make on-the-spot adjustments.’’

McKenna says many bands ask for Bergsten Music when they’re in the area. “Some bands, like the Neville Brothers and the Beach Boys, don’t travel with any equipment,’’ he said. “They have to trust the rental company to get everything right.’’

Many other bands start their national tours in Boston, including Kelly Clarkson, who rented 15 guitars from Bergsten, while bands like Jethro Tull and the Saw Doctors store equipment at Bergsten Music, since Boston is a launch point for them.

Over the years, Bergsten says, he’s gotten some odd requests, mostly for some hard-to-find African percussion instruments, but he says he can usually come up with something.

“Once, a band from China needed two 55-gallon oil drums,’’ he said. “I wasn’t sure where to get them, but I went for a walk in the woods behind my house, found two there, dragged them out, cleaned them up, and they got the gig.’’

When vintage instruments began to be popular as an investment about a decade ago, Bergsten turned to his fascination with vintage Vox amplifiers and various collectible vintage guitars and made some of that equipment available for rental. In his showroom area, he has a complete Beatles set up, including Ringo’s drums, Vox super-Beatle, and a Rickenbacker guitar.

Lately, Bergsten has been getting more calls from movie companies filming in Massachusetts that need a vintage musical setup.

“When I started, I had no idea things would go in this direction,’’ he said. “I’m happy to be in the business.’’

Noteworthy
Over the years, Bergsten Music owner Andy Bergsten has received requests for all kinds of instruments and setups. The most outrageous rental he ever handled was for a corporate event in the 1990s at a Boston hotel. The company recreated the Pan Am clipper jet the Beatles arrived on for their first US tour in 1964 and then rented a full Beatles setup, including Ringo's Ludwig drums, guitars, and amps, and had it set up on the hors d'oeuvres table. Bergsten's more routine jobs include such shows as the Boston Symphony Orchestra's Pops Fourth of July concert with Neil Diamond at the Hatch Shell in Boston this year.