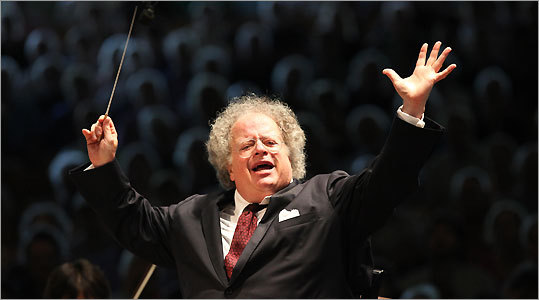 For the third time in his five years leading the Boston Symphony Orchestra, music director James Levine will miss time on the podium due to injury. Levine, 66, announced yesterday that he will undergo surgery for a herniated spinal disk.

That operation, scheduled for this week in New York, sidelines him at least for BSO concerts this week, including a high-profile performance in New York tomorrow night for Carnegie Hall’s season opener.

The timing of Levine’s setback is eerily similar to another he suffered last year. In July 2008, he conducted the BSO’s opening weekend at Tanglewood, then abruptly left for New York for removal of what turned out to be a cancerous growth on a kidney. One week ago, he kicked off his sixth season with the BSO and conducted another program Saturday night.

Levine, who began as the BSO’s music director in 2004, is the highest-paid conductor in the country, thanks to his two high-profile jobs. He earns a combined $3.4 million a year split almost evenly between the BSO and the Metropolitan Opera.

He won’t be paid for any concerts he misses, BSO management confirmed yesterday, but the organization could still feel his absence financially if attendance dips without its marquee leader on the podium.

No specific event precipitated the need for back surgery, according to Mark Volpe, the BSO’s managing director, but Levine has had back problems for years.

The pain had increased recently, said Volpe. And after Saturday’s concert, Levine appeared to be hobbling. He told Volpe he had to see his doctor, who diagnosed the herniated disk.

On Monday, Levine told Volpe he would need surgery.

“He doesn’t complain usually, but he came off after the concert and said his arms were weak,’’ said Volpe. “Usually, after a concert, he’s excited and we talk about the singer or the woodwinds. It’s very unusual for him to say he’s not comfortable.’’

For the short term, the BSO assigned assistant conductor Shi-Yeon Sung to conduct last night’s performance of Stravinsky’s “Symphony of Psalms’’ and Mozart’s Requiem. Sung and assistant conductor Julian Kuerti will split Saturday’s program. Kuerti also stepped in at Tanglewood in 2008 to fill in for Levine.

Volpe did not know yesterday who would conduct the BSO’s Carnegie Hall concert.

It was also not clear when Levine will return. The conductor was not available for comment, a spokesman said. But Ronald A. Wilford, his manager, said in an interview yesterday that he expects Levine back by Oct. 22, when he is set to lead the BSO in three Beethoven symphonies that begin a series of concerts, “Beethoven: The Complete Symphonies.’’

Dr. Brian Kwon, a spine surgeon at New England Baptist Hospital who is not Levine’s doctor but routinely treats patients with similar ailments, said that recovery time from such surgery can be as short as two to four weeks. Levine’s age and extra weight could slow down the healing, but Kwon expected the maestro would fully recover and return soon to the podium.

“The younger and more spry you are, the better your physical fitness level can help in the recovery,’’ Kwon said. “On the short side, for my patients, I let them go back to more sedentary work in two to four weeks. My laborers are back in eight to 12 weeks. If I could estimate, one to three months would be a reasonable estimate.’’

Levine missed four months conducting in 2006 after he fell onstage during a Symphony Hall concert and tore his rotator cuff. Last year, the conductor missed most of the Tanglewood season following the kidney surgery.

Both Wilford and Volpe said that they had spoken with Levine and that he seems optimistic.

“He’s upset and disappointed and knows we don’t open Carnegie every year,’’ Volpe said. “But then he gets into this and says, ‘This can get fixed.’ ’’

She could tell last week that the conductor was walking more gingerly than usual, but she was still disappointed.

“He’s so supportive and so wonderful, and it’s just a thrill to work with him,’’ Hobson Pilot said yesterday after practicing. “But the show goes on.’’