Still made for lovin’ you 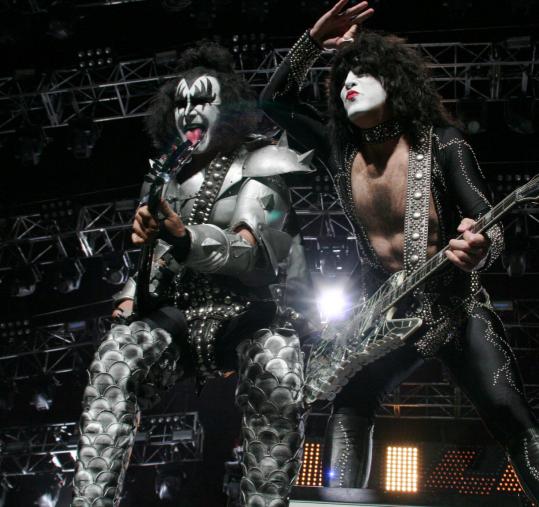 Gene Simmons (left) and Paul Stanley are the remaining original members of Kiss. Last week the band was nominated for induction to the Rock and Roll Hall of Fame.
By Sarah Rodman Globe Staff / September 29, 2009

They’ve been extolling the virtues of all-night rocking and daily partying for 35 years, and they’re not done yet. Next Tuesday, the day after filling the TD Garden with its spectacle, Kiss releases its first album in 11 years, “Sonic Boom.’’ Last week, the makeup-loving quartet learned that, 10 years after their initial eligibility, they made the nomination ballot for the Rock and Roll Hall of Fame. We chatted with amiable Kiss guitarist-vocalist Paul Stanley last week as the band prepared to rock Cobo Center in Detroit, the scene of their first “Alive’’ album.

Q. Congratulations on the nomination. How are you feeling about it?

A. There’s a long way between a nomination and induction. That being said, this is really something that I think is exciting. There is a very vocal segment of Kiss fans and rock fans who have wanted us in. And so for them I’m very, very pleased.

Q. What was the impetus for the new album, since you probably could’ve carried on successfully as you have until you retired?

A. I think this lineup [with drummer Eric Singer and lead guitarist Tommy Thayer] is so terrific and being in the midst of our most successful, biggest tour ever . . . it was so obvious, not only to me, but to the fans, how great the band is and how quintessentially we are Kiss. For me it was just a matter of one stumbling block, and that would be me producing the album. It really was about, at this point, making sure that I didn’t have to make apologies for something that came out.

Q. Why have Eric and Tommy wear Ace and Peter’s makeup? Were the characters they came up with just really lame, like sunflower man or something?

A. We’ve built those characters over 35 years and the idea that anybody owns those is ridiculous. We were there when they were created and we’ve worked our butts off for 35 years, so the idea that we should have “snail man’’ in the band is ridiculous. We did that at one point and realized that it really was a disservice to the fans because the fans know those four iconic figures. That’s Kiss to everybody, and whether someday somebody wears my makeup, I’d consider it an honor quite honestly. It would mean that the band is continuing with the same philosophy and thriving without me.

Q. Say you’re an aging Kiss fan who now only wants to rock ’n’ roll part of the night and party every other day. Could you still be considered fit for duty in the Kiss army?

A. It’s all about your attitude, right? It’s not about quantity, it’s about quality. So if it’s every other day, it’s allowed. Just make sure it’s something worth remembering.