The need to make music 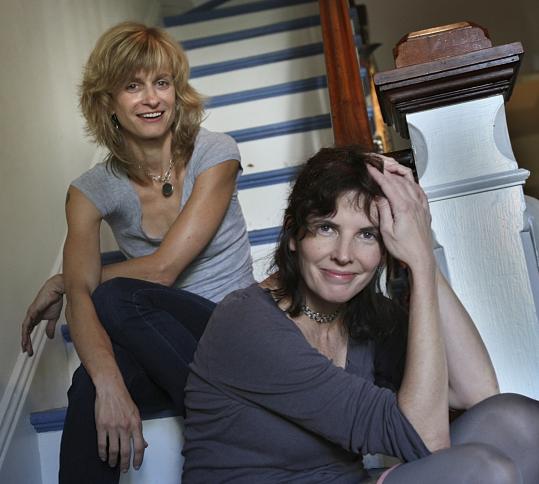 BROOKLINE - If every beginning has an end, singer-guitarist Karen Harris is living proof of an inverse, lesser-known axiom: Every end has a beginning.

In the Arlington singer-songwriter’s case, it just might be a brighter one than she experienced the first time around with Edith, a pop-rocking Boston combo that played the club circuit earlier this decade and then faded away. It wasn’t so much the case of a band missing its moment as it was a band enjoying the moment and moving on.

A lot has changed since those days. Harris had a couple of kids, who are now 7 and 5. Despite being blessed with a cool voice and a star’s presence, she wasn’t sure she’d ever actually return to a stage, as much as she wanted to.

“It’s hard for me to write songs when I’m not full of angst,’’ Harris says over lunch at a local pub with her old friend and new musical collaborator, keyboardist Terri Brosius. “I was content and nesting with these two kids for so long that it never occurred to me to write a song. But then I had a kind of heartbreak situation and I couldn’t not write the songs. This felt necessary, like a biological function. I had to hold my guitar and write.’’

“It feels all of these songs were born of all one sad time,’’ she adds. “And I guess I wanted to memorialize that. That’s the best way I can say it without being too grisly about the details, but it was a bumpy time.’’

Harris won’t elaborate on what specific emotional trauma prompted her to make new music. But the byproduct of her heartache is “Mouth to Mouth,’’ the debut album by the Vivs, her new band that really isn’t a new group at all. In fact, the Vivs - who host a CD release show tonight at Church - are essentially the guys from Edith, plus ex-Tribe keyboardist Brosius. Yet “Mouth to Mouth’’ feels bracingly fresh, if cut with a beautifully bitter shade of blue.

“It had been so long since Edith that it felt like a totally new germination or embodiment of what we were doing,’’ Harris says. “So I wanted it to be kind of a girl’s name but double because of Terri being in the band. And I had gotten sick of people asking me if I was Edith. Plus, I liked the word ‘vivir’ - the Latin root for ‘to live.’ ’’ Harris knows about these things, given her vocation as an English teacher at Brookline High School.

What she and her group - which includes guitarist Matt Magee, bassist Jim Collins, and drummer Scott Rogers - also know about is melody and hooks, and where to put them. “Mouth to Mouth’’ sounds like an unselfconscious tonic for tough times. Terrifically nervy, riff-charged tracks like “Waking Up’’ and “(You Should Have Seen) The Other Guy’’ are sharpshooter-sure shots of what the old-timers used to call rock ’n’ roll. In contrast to the current pop landscape’s hydra-headed, multi-hyphenated genre permutations, “Mouth to Mouth’’ sounds positively defiant - a classic old-school guitar pop record.

“The songs were coming so fast from Karen,’’ Brosius says of the writing and recording sessions. “And when I still listen to the album, I think about how I had never really worked with anybody who had that big a creative burst in that short a time.’’

Brosius herself took some time off after her band broke up, marrying Tribe’s lead guitarist, Eric Brosius, and raising a daughter, now 8 years old. She and her husband live four houses away from Harris in Arlington.

After Tribe, she says, “I started teaching piano and ringing in a hand bell choir and began playing classical piano.’’ With her husband, she also developed video games and has done voice work for video game characters.

But when Harris began playing her the batch of new songs she had written, “it just slammed me back into the music. The Vivs really helped me transition everything back into it.’’

Harris nods at her friend’s assessment. Being happily subsumed in parenthood, “music felt selfish and not that necessary,’’ Harris says. “Listening to it felt necessary, but not making it. Now, I feel like I have my own corner of my own skin again.’’

ALL SIGNS POINT NORTH: As if their limited-edition hand-pressed show flier wasn’t sumptuous enough, Boston minimalist indie-folk outfit the Points North have a gorgeous new LP, “I Saw Across the Sound,’’ out next week and an Oct. 1 show to celebrate the occasion. The best part? The $8 cover gets you a copy of the album! That’s at the First Church in Jamaica Plain, 6 Eliot St.

COLORED LIGHTS: Boston alt-rock upstarts the Lights Out unleash their full-length debut, “Color Machine,’’ with a CD release show tonight at T.T. the Bear’s. Also on the bill are Township, Reverse, and Roman Traffic, so get there early. For more info, go to www.ttthebears.com or www.thelightsout.com.

THE VIVS Host a CD release party at Church tonight, with Buttercup, the Barnies, and David Minehan’s Organ Donors, starting at 8.