BSO opens season by honoring one of its own 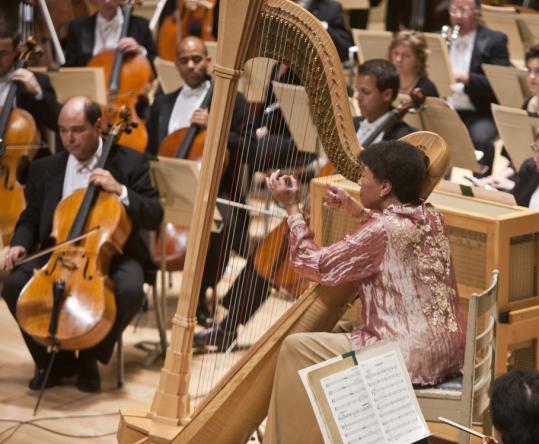 The BSO honored Ann Hobson Pilot, the former principal harpist who retired this summer after a four-decade career with the orchestra. (Michael J. Lutch)
By Jeremy Eichler Globe Staff / September 24, 2009

From a musical perspective, opening nights of orchestral seasons are often fairly formulaic affairs: one part star soloist, one part fizzy standard repertoire, then OK let’s head to dinner. At last night’s opener in Symphony Hall the Boston Symphony Orchestra tried admirably to tweak the annual routine, not so much by altering the template as by adding to it.

There was still a well-known soloist (pianist Evgeny Kissin) and familiar masterworks (including Debussy’s “La Mer’’), but the BSO also seized the moment to honor one of its own, Ann Hobson Pilot, the former principal harpist who retired this summer after a distinguished four-decade career with the orchestra. The honoring was also done in the best possible way: by the commissioning of a new work. Pilot chose John Williams as the composer to pen her tribute, and the new work, “On Willows and Birches,’’ was unveiled last night. It was the first time a BSO opener featured a premiere since 1980, when Seiji Ozawa led Bernstein’s “Divertimento.’’

James Levine was on the podium, looking energetic as he led a spacious and tonally generous account of Berlioz’s “Roman Carnival’’ Overture, with Robert Sheena floating a poised English horn solo and the brass section erupting with some fiercely festive volleys in the final pages of the score.

Kissin first made his name with the Chopin piano concertos, and they still flow effortlessly from his fingers, at least judging by last night’s technically brilliant account of Piano Concerto No. 2. You had to admire the astonishing fluidity and clarity of his passagework, though there was also a certain emotional chilliness that hovered over his playing. It was a pleasant surprise when a solo encore - a Schubert-Liszt Valse-Caprice from “Soirees de Vienne’’ - brought out a touch more warmth, fantasy, and openness.

After intermission came the new Williams work, a well-crafted two-movement concerto that clearly fulfills its stated aims of paying tribute to Pilot and showcasing her formidable musicianship. That said, it is a modest work in its musical substance and in its effect. The first movement, titled “On Willows’’ after a line from Psalm 137, is slow, spare, and ruminative, with an undulating solo harp line drifting above a hazy orchestral landscape, creating a kind of spectral chamber music that seems to be heading somewhere it never quite reaches. The second movement, “On Birches’’ after the Robert Frost poem, is more chipper, caffeinated, and rhythmically emphatic, with an extended cadenza that puts the soloist’s virtuosity squarely on display.

And Pilot had plenty of it to show this appreciative audience. Her playing had impressive rhythmic clarity but also a keen sense of mood and color, not to mention a fundamental graciousness and expressive warmth. As the crowd’s ovation made clear, she will be missed.