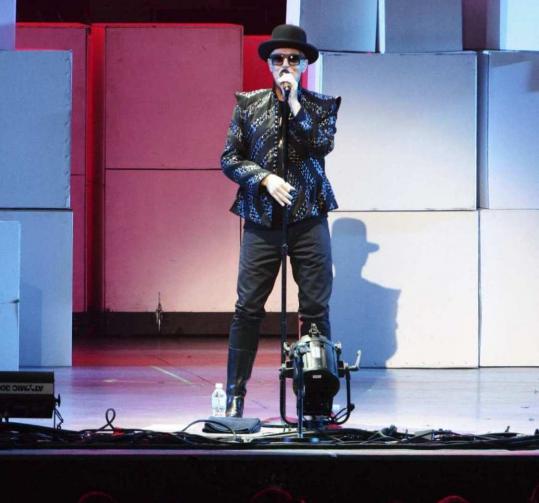 There are advantages to sustaining a music career that stretches back 25 years, even beyond the benefits of fan adoration and plump royalty checks. As Neil Tennant and Chris Lowe demonstrated Saturday evening, early-career songs that once sounded hopelessly dated eventually swing back around to suit modern tastes.

For their 90-minute set at the House of Blues, synth-pop veterans the Pet Shop Boys dusted off a number of mid-1980s tunes that have matured beautifully. Even long-forgotten album tracks such as “Two Divided by Zero,’’ a song that was inspired by a talking calculator (now that’s old), gleefully bleeped along as if recently written by a pair of irony-loving kids as a paean to 1980s technology.

There was a strong turnout Saturday night for a band that last cracked the Billboard top 40 in 1988, but in the duo’s native UK they have continued to thrive. Since many Americans last kept tabs on the Pet Shop Boys, they have written a musical, scored a silent film, composed for artists as such as Tina Turner and Kylie Minogue, and are currently writing a ballet.

Given their resume, the stage show was appropriately theatrical, with Tennant and Lowe acting as sardonic commentators to the throbbing video projections and a quartet of dancers who spent much of the show wearing cubes that covered their heads. In an unlikely nod, the set, which was primarily composed of white cubes that were continually knocked down and then rebuilt, was a homage to Pink Floyd’s “The Wall.’’

The video, the dancers, and their Lady Gaga-esque couture, created visual stimulation to counter a pair of men best known for standing glumly onstage. More exciting than the theatrics was the reminder of what an incredible catalog the Pet Shop Boys have amassed. They skimmed over material from their most recent album, “Yes,’’ while cleverly weaving old with new. “Pandemonium’’ was mashed with the sexually charged “Can You Forgive Her?’’ and “Building a Wall’’ literally crashed into the band’s cover of the Village People’s “Go West,’’ which was inexplicably staged as an oddly exhilarating communist calisthenics routine.

Tennant’s sing-speak voice has changed little in 25 years, perhaps owing to the fact that he seldom strains his pipes. But his dry delivery is key to the band’s formula. While synthesizers soared and roared behind him, he deadpanned exquisitely to the autobiographical “Left to My Own Devices.’’ Any band that can work “In the back of my mind I heard distant feet/ Che Guevara and Debussy to a disco beat’’ into a pop song deserves to strut about onstage in a king’s crown and robe, and that is exactly what Tennant did as he sang Coldplay’s “Viva La Vida.’’ The wonderfully cheeky moment was devoured by the crowd.

In the end, no one needed the royal accoutrement to be reminded that these middle-aged boys remain kings of their own erudite, synthesized universe.

PET SHOP BOYS At: the House of Blues,