Rockers’ first CD in years strikes a more personal note, but on stage they are as electric as ever 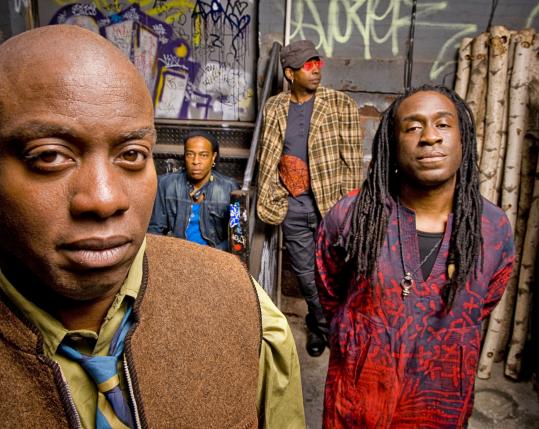 BILL BERNSTEINThe four members of Living Colour - (from left) Corey Glover, Doug Wimbish, Vernon Reid, and Will Calhoun - have been together from the start. (Bill Bernstein)
By Ken Capobianco Globe Correspondent / September 4, 2009

Living Colour’s lead singer, Corey Glover, wants to make one thing emphatically clear about the arrival of “The Chair in the Doorway,’’ the group’s first record in six years. “People are under the mistaken impression that this is a reunion or something,’’ he says. “They think that when we broke up in 1995 we haven’t been together since, but we’ve been a band all this decade. We’ve taken time out to do our own things but we’ve played and worked together.’’

So is it a comeback?

Maybe. But for a group that makes music as complex and dexterous as Living Colour, nothing is readily transparent. “The Chair in the Doorway’’ finds the four-man unit in vivid form. It’s a departure from the politically charged, peel-your-ears-back approach of its early, breakthrough records, “Vivid’’ (1988) and “Time’s Up “(1990). For those who have paid attention to Living Colour, though, through their last disc, 2003’s “Collideoscope,’’ it’s the logical evolution for them.

“Of course, you can recognize us; we have our sound,’’ Glover says from his home in Harlem. “But what we wanted to do was to show people who we are now at this time. We knew we couldn’t rest on our laurels.’’ Those laurels include four Grammys and a huge swath of influence. Living Colour was the first African-American hard rock band to find mainstream success, and their sound inspired many of the funk-rock groups and hip-hop/rock hybrids that emerged in the 1990s, most notably Rage Against the Machine.

“This is much more of a personal record,’’ Glover says. “We sat down and decided to take a hard look at our own lives. This isn’t a political record in a broad sense. . . . We want the songs and lyrics to be a microcosm to the larger picture of what is happening and has happened in the country. Our stories are yours. They are real. They are personal, and you need to see how they reflect back on your life.’’

The sense of unease that many Americans feel these days is also present within the band. On “Burned Bridges,’’ Glover sings: “Stumbling in the darkness here / My life seems less bizarre / Can’t shut my ears off / To the sound of my own screams / No matter how hard I try / I can’t escape my dreams.’’

On the album’s most moving track, “Behind the Sun,’’ Glover wails: “You may care / We’re still here / You’re still there / Everyone’s happy / Life is sweet / Parallel lines that never meet.’’ The song was inspired by post-Katrina New Orleans.

“It’s basically about the two worlds that are within most troubled cities,’’ Glover says. “This is specific to New Orleans, but it could be Boston or wherever there’s a tremendous disparity. There’s a difference between those standing on shaky ground and the other side looking in. We’ve made tremendous strides in this country, but we have a very long way to go.’’

Though Living Colour has toured Europe consistently and is still popular there, Glover says he and his bandmates understand they are almost starting from scratch in America. Glover still recalls playing T.T. the Bear’s in 1988, before the band began playing festivals and arenas, and being put in regular rotation on MTV.

“That was our first Boston gig, and that’s where our mindset is now,’’ Glover says. “We’re going to show you just how good we are and make you really understand what Living Colour is about. You can’t get that in arenas or festivals. We know we are not going to sell a lot of records. Those days are gone.

“We are a live band. We’re going to use the Internet and post as much live material as possible. We’ll make another CD after this, but people have things backward. A CD is snapshot in time, not a reason for being. We’ve got to reach a new audience that may not even know about us. That’s done by playing and getting this music heard. We’re confident they’ll come back.’’