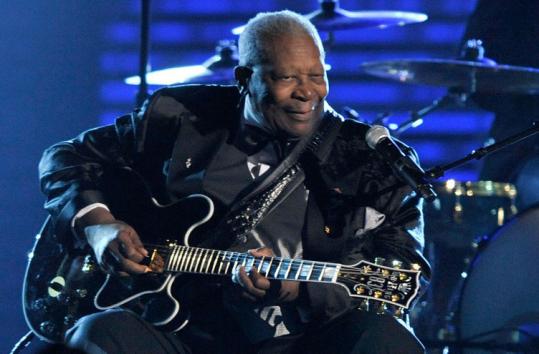 COHASSET - You wonder how long B.B. King can keep this up. And then you see a show like the one he put on Saturday night and you wonder what in the world could stop him.

The 83-year-old king of the blues - he told us his age at least a dozen times - has been at this for more than 60 years, yet his age manifests itself on stage only in his inability to stand while he performs. A big guy who suffers from diabetes, he played his 11-song, 90-minute set while seated. But his deep, growling voice was bullhorn-strong - shockingly so - and his fingers were ever nimble, always finding soul-stirring ways to end his solos.

And he can tell stories. Man, can he spin an anecdote. These are not the same stories he’s been telling for years, either. He kept it current with references to Olympic swimmer Michael Phelps and his disappointment in the messages of some of today’s pop songs. “I don’t like the way some blues singers, rappers, and hip-hoppers have been saying bad things about the ladies,’’ he said before leading his eight-piece backing band in a bluesy take of “You Are My Sunshine.’’

The music - ah yes. After the George Gritzbach Band opened the concert with a six-song set of electric blues, King started with the old standby “I Need You So,’’ masterfully transforming the word “I’’ into an elongated “aaarrrggghhhhhh.’’ Naturally he closed with “The Thrill Is Gone,’’ but some of the other selections were not so obvious. With a heavy dose of self-deprecating humor, he tore through “One Kind Favor,’’ whose narrator asks the listener to keep his grave clean. There was a splendid moment in his guitar solo when he took one note, shook it full of vibrato, then held it and bent it slightly until it sounded right to him.

It is this mix of supreme musicianship and audience engagement that keeps King magnetic and makes each concert an event. When a woman approached the stage, tossed a rolled-up B.B. King concert poster at his feet, and then returned to her seat, he had her come back to the stage, where he not only signed the poster but had a long conversation with her.

When you do that and then infuse the slow blues of “All Over Again’’ with both drama and humor - given its lyric “I’ve got a good mind to give up living and go shopping instead, to pick up me a tombstone, and be declared dead’’ - then you are a capital-E Entertainer.