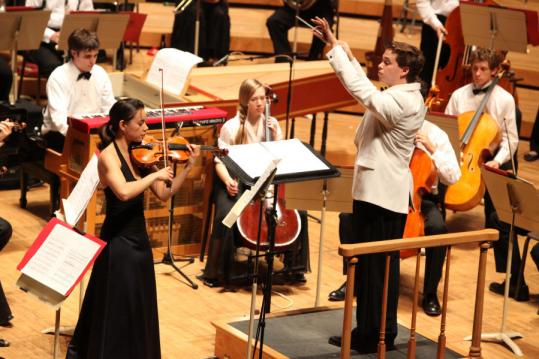 LENOX - “It’s like you’re changing channels’’ - that’s how Augusta Read Thomas, director of this year’s Festival of Contemporary Music at Tanglewood, described her programming to Richard Dyer, the former Globe critic, in Monday’s pre-concert conversation. Dyer, for his part, called it “the most diverse’’ he had attended. The festival’s second half continued that consistent inconsistency.

On the second half, Stephanie Nussbaum was a commanding, insinuating soloist in John Zorn’s violin concerto “Contes de fées,’’ that composer’s customary quick-edit collage applied to a spiny musical dialect. It was a fine foil to the slow-dissolve, long-take cinematic sweep of Wolfgang Rihm’s “Verwandlung 2: Musik für Orchester.’’ Madaras, Nawri, and McAdams, along with FCM stalwart Stefan Asbury, were the respective conductors, drawing sharp, uninhibited performances.

After such stylistic and symphonic richness, Tuesday’s solo piano recital by British new-music specialist Nicolas Hodges seemed more epilogue than finale. The program stayed within a European modernist aesthetic, one virtuosic, note-filled expressive gesture after another; even the concert’s American entry, Book I of Frederic Rzewski’s “Nanosonatas,’’ fit right in, fleeting jazz and Impressionist references notwithstanding.

The congruence actually highlighted differences in temperament and efficiency: similar textures coalescing first into the cool vigor of Pierre Boulez’s “Incises,’’ then the warmer languor of Henri Dutilleux’s “Trois Préludes’’; Hans Thomalla’s “Piano Counterpart’’ punctuated by Boulez’s “une page d’éphéméride,’’ the former taking 11 minutes to say what the latter seems to accomplish in three. Hodges, in superb control throughout (and opting for very old-school white tie and tails), finished the evening and festival with Michael Finnissy’s “Mit Arnold Schoenberg,’’ an homage tracing that ur-modernist’s shifts of vocabulary, filtered through Finnissy’s own multilayered manner. The piece closes not with Schoenberg’s dodecaphony, but his on-again, off-again relationship to the classical canon, cutting off in the middle of a mid-18th-century-fragment. Contemporary music is - and has always been - unfinished business.