By the time it got to Woodstock, Quill had peaked 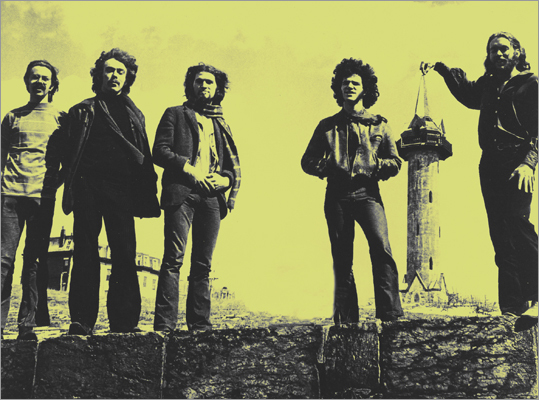 The Boston band Quill was the first rock act to play at the 1969 festival.
By James Sullivan Globe Correspondent / August 9, 2009

Given all the hubbub over the 40th anniversary of Woodstock, we think we’ve heard all the stories. Yes, minds were blown on Max Yasgur’s farm. Babies were born. And careers were made.

Santana was a ragtag bunch of unknowns from San Francisco before the festival. Other great performances guaranteed lucrative runs for the British journeyman Joe Cocker, Sly & the Family Stone, and others.

But if Woodstock was a beginning for so many, it was the beginning of the end for the sole Boston band that played the festival.

Scantly remembered today, the group, called Quill, was one of the more notable draws in town in the two years between the Summer of Love and the hippie generation’s “Aquarian exposition.’’ Routinely outperforming visiting Boston headliners such as the Who and Janis Joplin, the band came to the attention of Woodstock organizers a few months before the festival, during a memorable jam with Jimi Hendrix and Stephen Stills at a midtown Manhattan nightclub.

After performing some public-service gigs on behalf of the promoters, the unheralded Quill had the distinction of be ing the first rock band to take the stage at Woodstock.

“It was pretty awe-inspiring to get up on that Saturday morning, with the leaves still dripping from the torrential rain,’’ remembers Dan Cole, one of two Massachusetts brothers who cofounded the band. “Two or three hours later, we were helicoptering [to the fairgrounds] with cows below. We come over the hill, and there’s half a million people.’’

Quill had already been staying around the rural New York town of Bethel, site of the festival, for weeks. Hired as emissaries to a skeptical community, the band played goodwill concerts at a prison, a home for juvenile delinquents, and a mental institution.

“It was a perfect setup for dealing with people who had difficulty finding their control switch,’’ says Jonathan Cole. “We pushed people to let go.’’

Inspired by innovators like the Beatles, Bob Dylan, and newcomers Pink Floyd, the five members of Quill played a hodgepodge of styles. They experimented with percussion, tossing rhythm instruments into the audience, and they worked out complex song structures with vocal and horn arrangements. Yet they saw their music as a commercial proposition.

Like so many of their contemporaries, the Coles followed the trends from garage rock and the folk revival to the British Invasion and full-blown improvisation. Growing up in a family of five kids in Merrimac, they were musically inclined from an early age.

“I can remember singing five-part harmonies in the car,’’ says Jonathan Cole.

The brothers - Jon, born in 1947, is a year and a half older - attended prep school together at Northfield Mount Hermon, where they effectively took over the school band. During his junior year Jon studied abroad, where his enthusiasm for American blues and roots music brought him a bit of celebrity in southern Germany.

Back home, he began studying art at the Boston Museum School. Dan, meanwhile, dropped out of Bard College and came to the city with designs on becoming an actor. The brothers redirected their energies when they landed an opportunity to showcase their songs for Ray Paret, a young entrepreneur then managing Ultimate Spinach, a front-running band in the record industry’s manufactured hype over the so-called “Bosstown Sound.’’

Paret and his management partner, David Jenks, introduced the Coles to three musicians who would round out the band - keyboardist Phil Thayer, guitarist Norm Rogers, and prodigious drummer Roger North. Recognition came quickly. By the summer of 1967, the band was gigging steadily.

“We were on a very fast upward trajectory,’’ says Jon. “We used to get people so worked up, by the time we were done, the house would be in a complete uproar.’’

“They were very energetic, creative people,’’ says Andy Pratt, who went to Woodstock as a guest of the band and later worked with Jon Cole on Pratt’s left-field hit, “Avenging Annie.’’ “They were fun to be around.’’

The bill on opening day at Woodstock, Friday, Aug. 15, 1969, was all folk music (Richie Havens, Joan Baez) as the massive crowd streamed in. Meanwhile, Dan Cole was fighting a nasty bug. “They took me to an old doctor in the Catskills, who gave me a shot of antibiotics,’’ he says.

The singer rallied, and the band took the stage a little after noon on Saturday. Quill played just four songs, opening with their lordly, Procol Harum-style signature tune, “They Live the Life.’’ But with the stage set high above the crowd and the sound system designed to carry across the fields, the band had difficulty making the kind of intimate connection they had mastered in the clubs.

To make matters worse, the biblical rainfall left little time for the crew to make sure the equipment was working properly. Though the Cole brothers say they’re still mystified by how it happened, somehow the audio tracking during their set didn’t sync with the film footage. As a result, Quill lost its shot to appear in the “Woodstock’’ documentary.

After the band’s set, a relieved Dan Cole drank some champagne with Grace Slick, congratulated members of Santana on their performance, and wandered for a while in the crowd. Late that night, he jumped in one of the helicopters for the return trip to the motel.

For Jon Cole, who had twin toddlers at home, backstage at Woodstock was no picnic. Though he spent a little time with the Who’s Keith Moon and John Entwistle, whom he had befriended at a joint appearance the previous year at the old Boston Music Hall, he was put off by the debauchery.

“I really didn’t like the indiscipline of the heavy druggies,’’ he says.

Though the band’s Woodstock appearance boosted its reputation on the touring circuit, it also drew cold shoulders from some envious musicians. For a variety of reasons, by the time Quill finished recording its debut album a few months later, Jon Cole had already started to distance himself. As a lark, he listed the brothers’ names phonetically on the inner sleeve, as “Ju-unk Khol’’ and “Da-ank Khol.’’

There’s an undeniable eggheadedness to the band’s lone, self-titled album, which was released before the end of 1969 by the same subsidiary of Atlantic Records that would put out the “Woodstock’’ album. The songs are more indicative of the inward-directed prog-rock to come than the freewheeling jams that characterized so many of the Woodstock bands.

Though Quill shows often ended in pandemonium - “very positive pandemonium,’’ says Jon - the wild variations in the group’s sound made it difficult to peg. In his new book, “The Road to Woodstock,’’ festival organizer Michael Lang remembers Quill as a “soft-rock’’ band, chosen for the goodwill tour because they played “rather benign rock and roll.’’

Despite the backhanded compliment, both Ray Paret and Dan Cole hit it off well enough with Lang to partner with him on several post-festival ventures. In the late 1970s, Cole helped Lang put together a road band for Joe Cocker. Other opportunities would come out of the festival experience, too: At one point Dan Cole was offered an audition to join Sha Na Na, the revival group.

“I thought, ‘Oh, God, this is ridiculous,’’’ he recalls. “They were really an old-timey, show-biz concept, and that’s not where I was coming from.’’

The Quill album was recorded in a home studio - in hindsight, a “numbskull’’ move, says Dan Cole. His brother takes the blame: “In the quest for control, being young kids, we overestimated our capabilities,’’ says Jon. “I was probably the biggest problem in that regard.’’

“Because they were so smart, I did a lot of things on their behalf that perhaps I shouldn’t have,’’ says Paret, an MIT graduate who now operates a filming facility in Culver City, Calif. “I could have gotten them a producer, but they talked me into doing it themselves.’’

By the time the record came out, both band and label knew that Quill would not appear in the “Woodstock’’ film. Ahmet Ertegun, the Atlantic Records executive who had signed them, was furious, they say. After a lackluster promotional tour, the album quickly vanished.

By then, Jon was gone, ready to embark on a new career as a recording engineer. After giving up on the music business altogether, he has lived in Hawaii for nearly three decades, where he has reinvented himself as a solar-energy expert.

Dan Cole, meanwhile, briefly soldiered on with a revamped Quill lineup, just long enough to record a second, unreleased album. Today he works as a business consultant after years as an executive with Sony’s professional audio-visual products division. He lives in Portland, Ore., as does Roger North, who played with the Holy Modal Rounders and invented his own line of drums.

True to form, the erudite Coles are philosophical about their old band. “These things have a short shelf life,’’ Dan says. “It’s a rare person or act who can last more than five or six years in entertainment. It’s the roughest business I’ve ever been involved in.’’

Now a rarity, Quill’s lone album can fetch big money in online auctions. Forty years on, the band is getting a bit of belated recognition for its unsung role in the Woodstock saga: Two of the four songs Quill performed at Woodstock will become available for the first time on Tuesday when they appear on Rhino’s six-disc box set “Woodstock: 40 Years On: Back to Yasgur’s Farm.’’

“We were joking that we might actually get paid for Woodstock, finally,’’ says Dan Cole.

Your ticket to memorabilia, photos, facts, and more as we look back on the festival, 40 years later.
Your comment is subject to the rules of our Posting Policy
This comment may appear on your public profile. Public Profile FAQ