Women with attitude, chops, and a low tolerance for fools are invading Bank of America Pavilion 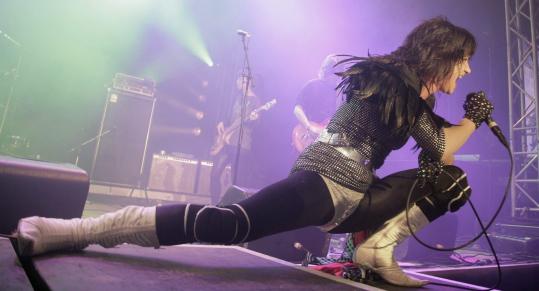 Juliette Lewis likes the strong women - Chrissie Hynde and Cat Power (a.k.a. Chan Marshall) - with whom she is touring. (Peter Klauzner/Epa)
By James Reed and Sarah Rodman Globe Staff / August 7, 2009

Harry and Blondie, tough rocker Pat Benatar, and the brash and beautiful punk attitude of the Donnas. Standing tall in the other corner are take-no-prisoners firebrand Chrissie Hynde of the Pretenders, indie soul-rock darling Cat Power (a.k.a. Chan Marshall), and Juliette “I’m an actress but I sing too’’ Lewis. With Blondie, Benatar, and the Donnas

arriving tomorrow night - and the Pretenders with Cat Power and Lewis on Wednesday - we checked in with a few of the rockers to see what they thought of their tour mates.

JULIETTE LEWIS leader of her own band

Q. You’re in pretty great company on this tour. How did that happen?

A. I was submitted [for consideration] as a little opener band, along with many other opener bands. I have no relationship to any of the other acts, other than I obviously admire them. Well, we do have the same booking agent, but they have hundreds of bands. So the fact that I was picked to open for the Pretenders was not lost on me.

A. Oh, yeah! One hundred thousand percent! “Precious’’! My favorites are kind of the more punk-rock songs. The first [Pretenders] album is so punk rock, even the production is lo-fi. With Chrissie Hynde and the Pretenders, the groove is all their own.

Q. Do you remember how you discovered them?

A. Probably when I was a kid, from radio. I was probably 12 or 13. Chrissie was just a force that I related to, and there weren’t many like that. There’s a handful of women that I really revere and feel a kinship towards. For me, it was Billie Holiday, Janis Joplin, Nina Simone, Tina Turner, Patti Smith, and Chrissie Hynde. I think I like women with a definite strength. Those are women who stuck with me today in my 30s.

Q. And how well do you know Cat Power’s music?

A. I have that album where she sort of has cat eyes on the cover [1996’s “What Would the Community Think’’]. I got “The Greatest,’’ of course, and was floored by that. And I have “The Covers Record’’ and “You Are Free.’’ I love her production and the way she records. Nothing is too precious and, of course, her voice - you can’t talk about her without talking about that voice. It reminds me of the old torch singers, and her deep, rich soul rasp I’m drawn to as well.

Q. If you had your own pick, who else, dead or alive, would you want on this tour?

A. Probably the Gossip. I’m crazy for Beth Ditto. She’s a force of fire on stage. I love everything she represents.

Q. Whose idea was it for you to go out on the road with Cat Power and Juliette Lewis?

A. Well, I was having a curry with Eric [Heywood], my pedal steel player, and we were thinking about who would make a great lineup for the summer tour. I said, “What about Cat Power?’’ I’ve never seen her - I’ve only heard her records - so we thought that would totally be awesome. And then apparently Juliette - who I also haven’t seen - I think she shares the same booking agent or something, and she must have been knocking around the office and heard about this tour and said, “Oh, I wanna get on that tour.’’ I mean, of course, Juliette Lewis - who’s gonna say no? She’s totally awesome. She’s one of those people where you already know what you’re getting. Her personality is so realized.

Q. I didn’t realize you were a Cat Power fan.

A. I’ve heard a couple of her records, which I think are amazing. Love ’em. I think they’re really unusual. And a lot of people now have come up and said, “Wow, I see you’re playing with Cat Power,’’ so I know she has a real following. I think Cat is the dark horse on this tour. She’s the mystery girl.

Q. I know you don’t think of rock in terms of gender, but are you finding other people are framing this as a female rock tour?

Q. Good. Maybe we’ve moved beyond thinking in those terms.

A. Maybe they’re afraid [to ask me]. I mean, I did that Lilith thing because that just seemed like it was going to be a blast. Come on, let’s get real here. Most of the musicians and the crew [for Lilith Fair] were not girls. And that was really fun because it was pretty nutty. I like that. I like the wild-card element. And actually, Sarah MacLachlan, who spearheaded Lilith, she’s a wild card. You don’t think so because she has real tender, beautiful ballads. But on the last show of our set, usually the other bands try to sabotage each other and [expletive] you up for the last show. And she jumped onstage and pulled her shirt off. And my band was just totally floored. They didn’t know where to look. Well, they knew where to look.

Q. If you could put someone else on this lineup, anyone come to mind?

A. I’m happy with the way it is. I don’t have many wish lists. I’ve got more than enough, thanks. J.R.

Q. You all have known Pat Benatar for a long time, right?

A. She was on the same record label as us, and we actually share a producer, Mike Chapman, as well, so yeah, our paths have crossed a few times over the years.

Q. You mentioned that back in the day you liked a few Benatar songs. Are there any you’ve come to appreciate since you’ve been touring together?

A. I really like her cover of the Rascals song “You Better Run.’’ That was one of my favorite bands, and it’s great to hear that song every night.

Q. What’s your take on the Donnas?

A. They have the right energy, a hard-rock punk energy, which balances out Pat’s hard rock and our punky new wave. It’s a fun tour. Back in the original days, I don’t know if we would’ve been sharing a bill with a band like Pat. The music is different. But I think as time goes on, the lines kind of blur, and there’s really only good and bad music, and I think the concept of this tour really works. The music is different, but it’s compatible.

Q. From your vantage point, have you seen things change for women trying to navigate the rock world since Debbie and Pat began?

A. Of course. Debbie opened the door for everybody, and Pat as well. Actually, when you think about what Pat does, since her music is a little harder rock, I think she definitely opened up the door for a lot of the hard-rock women. They were both trailblazers, for sure.

Q. What’s next for Blondie?

A. One of the main reasons we got this tour going was because we need to make a new record. We’ve been working on new material in the sound checks and trying out one or two new songs in the show. Obviously with this kind of tour people are expecting to hear the more familiar stuff, but we’re planning to go right in the studio after this. When we got back together in the late ’90s, the thing we really wanted to do was make new music; it wasn’t about just going out and doing a greatest-hits show. It took a good two years to collect the material and to become a band again and feel confident about going out again and having something to say. And I think we’ve gotten to that point again. SARAH RODMAN

TORRY CASTELLANO drummer for the Donnas

Q. When you hear Blondie and Pat Benatar, what do you think?

A. I just think that both of the bands behind the frontwomen are so solid and make such great music. And then you have these amazing singers on top of that, and I feel like that is just so powerful. And the songs are so classic for both of them that you can go back to them over and over again. I do have to say as a female in a band in the rock ’n’ roll world, it’s really nice to have strong women to look up to like Debbie and Pat, women that really just went for it and didn’t listen to the critics. To me that’s very important.

Q. You’ve played with Juliette Lewis. Do you get the sense that she’s enjoying the rock ’n’ roll part of her life?

A. Completely! She’s in the band, you know what I mean? It’s not just some side thing.

Q. What do you make of these two bills on the road right now, because there still aren’t that many high-profile, female-fronted - or in your case, all-female - rock bands.

A. I know. It’s disappointing to me because being in a band has been so awesome. Not just playing shows, but even when we were just in the garage. It was just a fun thing to do after school. And so I just really wish other young girls and guys could get into it because I feel like it’s so awesome to experience that. S.R.

CHRISSIE HYNDE singer-guitarist for the Pretenders
Your comment is subject to the rules of our Posting Policy
This comment may appear on your public profile. Public Profile FAQ