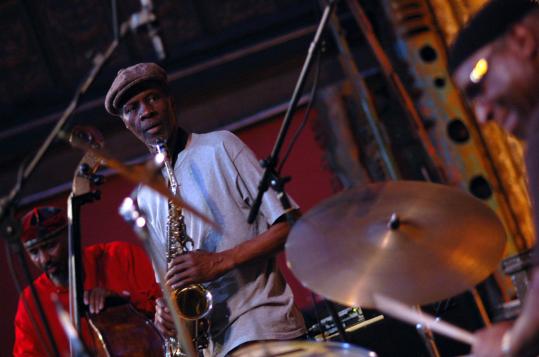 Newport’s jazz festival - which this year has been christened George Wein’s CareFusion Jazz Festival 55 - once again will bring some of the music’s biggest and most popular practitioners to Fort Adams State Park in Rhode Island. But buried within this weekend’s schedule, and relegated to a smaller stage, is a trio making a once-in-a-lifetime appearance in our neck of the woods: a free-jazz group called By Any Means.

The trio of alto saxophonist Charles Gayle, bassist William Parker, and drummer Rashied Ali play with a potency and urgency that can make your hairs stand on end. They also just happened to have made one of the greatest albums in free jazz, a 1993 date called “Touchin’ on Trane,’’ a collection of tunes inspired by, rather than composed by, John Coltrane. (For contractual reasons, the album was released under the artists’ individual names rather than by By Any Means.) In 2008, more than 20 years after it formed, By Any Means finally released a proper album, a superb two-CD set called “Live at Crescendo’’ that was recorded at a club in Sweden.

Now, for the first time, the New York-based trio will play a date in New England, at one of the most revered events in jazz lore - the Newport jazz festival.

It’s not as though By Any Means has been touring extensively and merely skipped by us through the years. Free jazz is an acquired taste, sort of a professional jam session, and even its most popular artists draw relatively small crowds. By Any Means has performed only sporadically - disbanding for years at a time before regrouping - and even in a good year these guys play together only five or six times.

Though the trio claims to have no leader, Ali, 75, is its senior and most famous member. He played with Coltrane during the saxophonist’s final years, most notably on the groundbreaking duo album “Interstellar Space,’’ on which Ali made his mark as a drummer who eschewed keeping time and instead improvised completely independent of structure. Gayle, 70, has acquired almost a mythic stature in avant-garde jazz. A fiery, spiritual altoist who occasionally plays piano (and sometimes performs while dressed as a clown), Gayle worked so little during the early part of his career that he was homeless for years. And Parker, at 57, is the baby of the group, but its most prolific member. He often leads several groups at the same time and is the most in-demand bassist in avant-garde jazz, doing side work for Cecil Taylor, David S. Ware, and Matthew Shipp, among others.

With such a breadth and depth of experiences, it is not surprising these three men play so well together.

“I really like this group a lot,’’ Ali says over his cellphone. “We just go with the flow. Everybody’s used to everybody. We play off of each other. We work together. Nobody’s got the lead. Everybody’s listening. We’re listening very closely to what we’re doing, and we’re listening to each other.’’

What makes the music so strong, so intoxicating, has to do with the chemistry among the players. Because they listen so intently to one another, they sense where a song is headed, despite the fact that nothing is composed. They play off one another’s strengths.

“Rashied is very mature,’’ Gayle says from his apartment in New York. “He’s been around. He’s subtle. He can be strong, but he’s probably the most subtle drummer I’ve ever worked with. He hears exceptionally well, and he’s very sensitive. William is like a rock; he’s sensitive, but he’s strong. And I don’t mean he’s noisy or anything. He’s very creative, but he’s very solid.’’

Gayle is one of the most combustible horn players in all of jazz. He’ll play the first few bars of a standard like “Cherokee’’ or “Naima’’ and then stretch it and beat it into something almost unrecognizable, then return seamlessly to the original melody. Or he’ll create a melody out of nothing, starting wherever he feels is right and ending up where the spirit guides him.

“I’m always thinking: Is this working?’’ Gayle says. “Are we fumbling or are we playing? I really think about that as we go on through it. It’s not so much the notes. Are we weaving right or should we change it? And I don’t mean change the song - something in there.’’

Although most of By Any Means’ music is entirely improvised - meaning nothing is composed or planned beforehand, not even a melody or chord progression - and although that music can get raucous and atonal at times, Ali and Gayle both say the Newport crowd won’t be shocked by what it hears. After all, this brand of free jazz has been around so long now that it can almost be called traditional.

“It’s not like we just started doing this,’’ Ali says.