Delivering the fundamentals with a fresh urgency 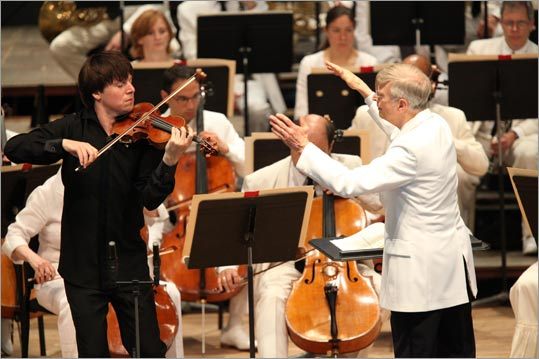 LENOX - When the Boston Symphony Orchestra is in the zone, it is serious fun. On paper, Sunday’s Tanglewood program seemed meat-and-potatoes classical: Beethoven, Bruch, Dvorák. But in practice, it also called to mind the BSO’s earliest seasons, their late-19th-century salad days as a new-music group specializing in the latest modern German school; and the orchestra nicely recaptured that evangelizing mojo, polishing up the old silver to a fresh shine.

Guest conductor Herbert Blomstedt had also led Friday’s performances, which were lovely but not terribly urgent. On Sunday, that haze was dispelled from the get-go with a tight account of Beethoven’s “Egmont’’ Overture, a stringent, streamlined narrative of struggle and triumph. (It almost plays like the Fifth Symphony’s highlight reel.) The playing was spot-on; the dramatic intensity unflagging.

Bruch’s G-minor Violin Concerto featured Joshua Bell, his satin-weave tone veneered with old-school vibrato, his phrasing tastefully volatile. The concerto is quintessentially well-crafted, the praise both faint (the music continually seeming to shy away from anything daring) and sincere: it’s testament to Bruch’s skill that the showpiece is as persuasive as it is.

Bell is probably the temperamental ideal to make its case, and he was in splendid form, whether snapping off emphatic accents in the pensive opening or tossing off dashing strings of double-stops in the finale.

It was the orchestra’s turn to show off in Dvorák’s Symphony No. 8; Blomstedt led a boisterous, sharply creased performance, rhythmically confident and primary-color vivid. The fairground chaos of the outer movements rang with clarity, the Adagio shifted fluidly among its mosaic of instrumental choirs, and the meticulous gossamer of the Allegretto was expertly realized.

The concert may not have provided any conceptual novelty, but the parts fell into place with an uncommon energetic grace. And the musicians knew it - by the end of the symphony, several of them could be seen enjoying not just the work at hand, but the collective results. The BSO gave the American premiere of Dvorák’s Eighth back in 1892; even after more than a century, that institutional memory can, apparently, be called back into a vivid present.