Jeff Tweedy talks about the tour, the new album, and the enthusiasm he has for the music 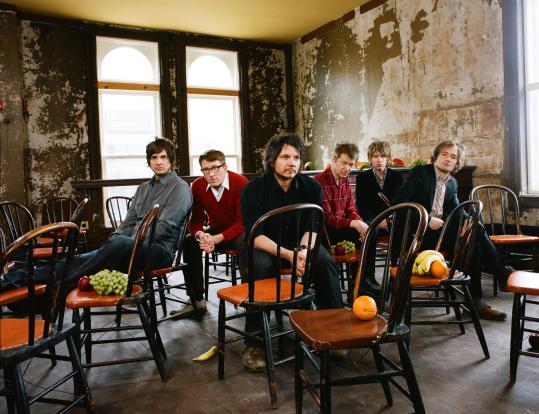 When asked why his band Wilco decided to play minor-league baseball stadiums this summer, Jeff Tweedy says simply, with a laugh, “Why not?’’

The singer-songwriter is a fan of the personality that the ball-yards have as opposed to the big corporate amphitheaters. “And if we’re able to attract that size audience in some of these places, it’s nice to make it a little unique.’’

The band’s latest release, “Wilco (the album),’’ is the second featuring this lineup, and its mix of styles offers a little bit of everything Wilco has dabbled in over the past 15 years - from straightforward pop to country-tinged rock to experimental detours into layered soundscapes.

We recently chatted by phone with Tweedy, who sounded blissful about “sitting backstage at a very bucolic setting in Oregon about to play an outdoor show tonight in front of some trees and grass and evergreens and stuff.’’

Q. In the press notes you talk about making a conscious return to studio craft on “Wilco (the album),’’ but you wouldn’t guess that from the natural way it sounds.

A. That’s one of the problems with using language that you use as a musician. When you say “use the studio,’’ people picture that you’re making “Sgt. Pepper’s’’ or something really wild and psychedelic. (Laughs.) What we meant was basically kind of crafting things in a way that make it the best it can sound but still hoping for it to sound like a spontaneous live track.

Q. Speaking of the Beatles, “Deeper Down’’ is actually sort of wild and psychedelic in a Fab Four kind of way. Letting influences show isn’t always intentional when recording, but are you a fan?

A. Oh, absolutely. It’s a part of our vocabulary as musicians; all of us are certainly conversant with those styles and those records, so that wouldn’t surprise me at all that we use some of those elements to make our own records.

Q. It seems like a different turn for you. It’s the first time a Wilco song has seemed frightening to me, in a good way.

A. (Laughs.) Well, that’s good. There’s a lot of scary stuff in the world, and I guess it’s OK for there to be a scary thing on a Wilco record as a reflection of the world.

Q. “Wilco (the song)’’ is the absolute opposite of that, as you promise your listeners that Wilco will love them and take care of them. I’ve often felt nurtured by my favorite bands, but it’s a funny thing to say in a song.

A. It was sort of a joke, but I wouldn’t have thought of singing that if it wasn’t something I felt - and not necessarily about Wilco records obviously - about my experience with other peoples’ records and the consolation I’ve been able to find in art and music. I just think you don’t see an infomercial for things that are really sustaining like that very often, so I thought it would be funny to have an infomercial. It’s like having a Picasso infomercial or something like that - not that we equate ourselves with Picasso, but you know what I mean.

Q. Of course. That no matter how crummy your day’s been, there is solace to be found in art?

A. It’s as good a strategy as I’ve found.

Q. Counting the live release and the “Mermaid Avenue’’ albums you did with Billy Bragg, this is Wilco’s 10th record. It’s been almost 15 years since the first. Has that time gone by quickly for you?

A. I’ve been making records for almost 20 years, and I feel pretty good that I’m as enthusiastic and maybe even more so than I’ve ever been. And I don’t feel like an old-timer, but I certainly feel experienced. (Laughs.) I think there’s a lot to be said for experience.

Q. You’re not the kind of band that does the same set list every night, are you?

A. No, we change it up every night. On a tour when a new record comes out, it’s probably a little bit more similar from night to night than it would be otherwise because there’s a handful of songs that you feel obligated to play because people are going to be really disappointed if you don’t play them. Then there’s the songs off the new record that you really want to play because you’re going to be disappointed if you don’t play them. But I think we do a pretty good job of mixing it up, and we take requests on our website every day. I think almost every show has at least one or two songs that you’re not going to hear if you go to a different city.

Q. So you’re saying I should follow you around?

A. I think everybody should. (Laughs.)