Direct from the teen-pop factory 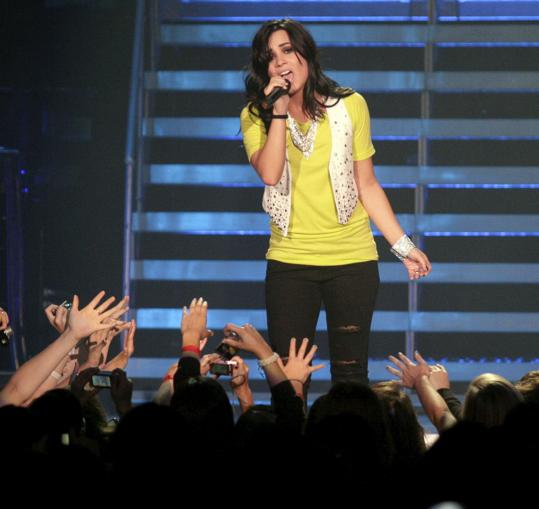 Stars like Demi Lovato and David Archuleta aren’t born, they’re made. And some, it seems, are made better than others. Agganis Arena pitted “American Idol’’ against Disney on Friday, and the message was clear: Simon Cowell may be Mr. Mean, but you don’t mess with the Mouse.

Last year’s “Idol’’ runner-up Archuleta made his big entrance by posing in silhouette and then waving awkwardly to fans before the lights came up, thus ruining whatever coolness he was shooting for in the first place. Expressing a vulnerability that spilled over into needy ingratiation, he was incapable of doing anything without an intense, earnest effort, even when he just aimed for “casual.’’

Normally, any kid who strains so hard to feel the music would be into Warped Tour emo, but Archuleta has instead embraced aggressively middle-of-the-road anthem pop like “Crush’’ and “My Hands.’’ Hints of personality peeked through from time to time in the simplified Coldplay of “Don’t Let Go’’ and “Zero Gravity,’’ which was marked by the barest hint of Erasure-style Eurodisco. But there usually seemed to be a hole on stage, even when Archuleta was at his most animated.

Disney princess Lovato, though equally factory-tooled, was practically a revelation. A combination of a junior Kelly Clarkson and a desexualized Katy Perry, she delivered a shockingly impressive set of well-honed variations on those two pillars of modern pop-rock.

There was also a streak of Cheap Trick (and the swinging stomp of “Elo Kiddies’’ in particular) running through the songs, courtesy of an enthusiastic band that appeared to know that they picked the winning tickets in the freelance musician teen-pop lottery. They provided the sneering guitar line (and brief Led Zeppelin quote) in “Party’’ and the intro of the Beatles’ “She’s So Heavy’’ that led into “Until You’re Mine,’’ but Lovato was confident, spirited, and more than capable of keeping up.

Not yet 17, she’s still slightly green, as evidenced by her singing “Don’t Forget’’ in such a whisper that her voice kept failing her. But the material from Lovato’s upcoming disc “Here We Go Again’’ showed her improving by leaps and bounds, especially on “Every Time You Lie.’’ Upbeat but shot through with hurt, thanks to some sad (synthesized) strings, it had enough ’60s British soul to suit Duffy or Adele. Most of Lovato’s other songs were uncomplicated by the need for depth. But the surface was gleaming.

The teen girls in KSM, who chose their name perhaps unaware that it’s more widely used to refer to Al Qaeda operative Khalid Sheikh Mohammed, opened with the kind of glaringly artificial candy-guitar rock that fakes rebellion but secretly gets good grades.