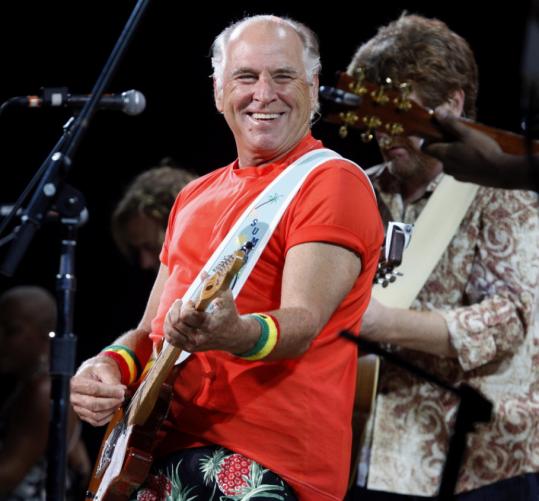 Last night was Jimmy Buffett’s 50th concert at the venue he still calls Great Woods, and odds are good a chunk of the 17,000 or so fans at the Center attended all of them. And who can blame them? Buffett is more than a tunesmith. He’s a walking lifestyle, a tuneful outlook, the barefoot figurehead in a laid-back philosopher’s club whose grass-skirted, Hawaiian-shirted members make annual pilgrimages to a virtual reality with its own breezy theme song. About a frozen drink.

Odds are also good that the 50 shows haven’t varied much from one to the next, and that’s precisely as it should be. Some artists trade in innovation and evolution; Buffett’s product relies on feel-good reliability. Even a pair of topical new songs, “Summerzcool’’ and “We’ve Got a Lot to Drink About,’’ address the recession with a signature bit of advice: Have a cocktail.

Summer school was the tongue-in-cheek theme of the 2 1/2-half hour show - everyone who didn’t pass out passed - and classroom décor was tropical: Buffett’s swim shorts, the island garden stage set, and idyllic video footage (not to mention music and lyrics) revolved around a theme of sand and surf. Dodging beachballs is serious sport at a Jimmy Buffett show.

A congenial host with a deep history in New England, Buffett paid frequent tribute to local places and faces. A reworked verse of “Manana’’ name-checked Tom Brady, the Red Sox, and Nantucket. “Changes in Latitudes, Changes in Attitudes’’ was accompanied by preshow footage shot in the parking lot, where revelers set up shop early in the afternoon. Buffett recalled “the good old days running around Paul’s Mall and Passim’’ before playing an acoustic version of “Come Monday,’’ a lovely folk-rocker and a welcome reminder of Buffett’s sturdy songwriting roots.

“Say hi to your mom and dad,’’ he hollered as Martha’s Vineyard homegirl Sally Taylor, daughter of James Taylor and Carly Simon, exited the stage.

Taylor added harmonies to “Brown-Eyed Girl,’’ one of a handful of welcome cover songs that peppered the set. CSN’s “Southern Cross,’’ the Grateful Dead’s “Scarlet Begonias,’’ Jesse Winchester’s “Rhumba Man,’’ and the Beatles’ “Yellow Submarine’’ tempered the near monomaniacal emphasis on the singer’s endearing beach-bum persona.

Buffett was backed by his longtime ensemble, the Coral Reefer Band; 2009’s 13-piece lineup featured memorable performances from ukulele whiz Jake Shimabukuro, Trinidadian steel drummer Robert Greenidge, and vocalist Nadirah Shakoor. Electric guitarist Peter Mayer did his best Link Wray on a lively new rocker called “Surfin’ in a Hurricane,’’ which Buffett said will be included in a collection to be released this fall. The party, evidently, never ends.

JIMMY BUFFETT AND THE CORAL REEFER BAND At: the Comcast Center, last night (and tomorrow)