Pianist Hamelin lives up to the buzz 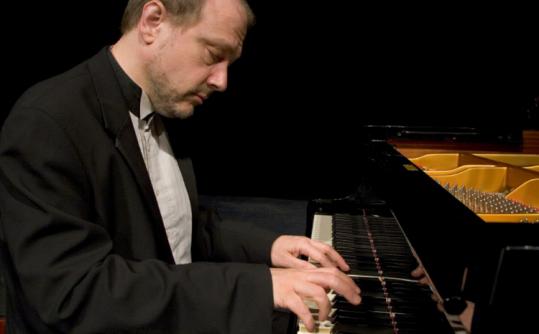 ROCKPORT - Marc-André Hamelin, newly moved to Massachusetts, enjoyed a sold-out welcome at the Rockport Art Association on Saturday; even Governor Deval Patrick was on hand for the Canadian-born pianist's Rockport Chamber Music Festival recital. Hamelin's super-virtuoso reputation may have been the draw, but his colossal technique also worked to more subtle advantage.

In Haydn's Variations in F minor (Hob. XVII/6), Hamelin displayed consummate clarity, transparency at all volumes, each line and note sharp-edged. He maintained a stately, grounded pace, only breaking the classical balance in the final section, with high-contrast effects intimating that Beethoven owed more to his studies with Haydn than he might have liked to admit.

It also made a stylistic bridge to Franz Liszt's Italian travelogue "Venezia e Napoli." Hamelin realized not only Liszt's demands, but the sonic imagination behind them: an undulating gondolier's song ringing through a mist of trills, those trills becoming operatic tremolos in the following "Canzone." Hamelin rolled through the wickedly fast repeated notes of the "" with more elegance than mere exigency, a spidery realization of a delicate, dangerous web of notes.

A seamless unspooling of Gabriel Fauré's D-flat major Nocturne no. 6, a Chopinesque homage that suddenly meanders into a post-Wagnerian expanse led to a Hamelin specialty, the Symphony for Solo Piano of Charles-Valentin Alkan. The 19th-century French virtuoso's distinctive music remains an Everest-like temptation to those pianists, like Hamelin, sufficiently equipped to scale its forbidding heights.

Where Liszt demands fantasy and magic, Alkan requires athleticism: playing the symphony is rather like sprinting a marathon. Hamelin filled the work's giant outlines with both orchestral color, hammered to hushed in a devilish Menuet, conjuring a third-hand melody among the layers of a funeral march, and, even in the breakneck velocity of the finale, orchestral power.

The power, in fact, practically overwhelmed the room. Festival director David Deveau acknowledged Governor Patrick's help in securing a Massachusetts Cultural Council grant toward the construction of Rockport's new recital hall, scheduled to open next year; Hamelin's huge performance easily would have filled the larger space. In the meantime, being symphonically surrounded and swamped made its own memorable hospitality.