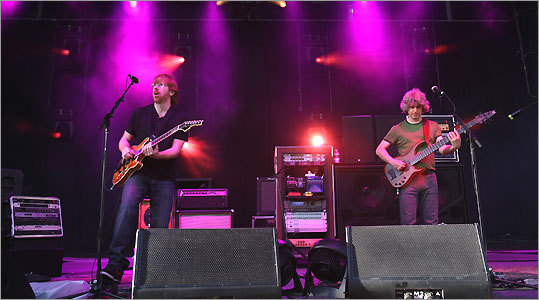 "The Star-Spangled Banner" felt like an appropriate opener for the Phish show at Fenway Park last night, as the members of the Vermont rock band reconvened with one another and their nation of fans to pledge allegiance to the jam.

If band members were seeking a good omen for this reunion, following a five-year hiatus, they had to look no farther than the sky. In the time it took them to get back from the rain-soaked infield - where they performed an intricate a cappella version of the anthem in Red Sox jerseys - to the stage for the start of the show proper, the sun had broken through and a rainbow appeared over the outfield.

The two-set performance, covering three hours and 20 minutes, revealed that little has changed during the break. None of the band members, who were all smiles, have lost an instrumental step, drummer Jon Fishman is still rocking his performance dress, the audience remains as interested in wriggling as watching, and the songs are sometimes taut and sharp or slack and hazy.

The first set featured shorter and snappier tunes. "Bouncing Around the Room" was a riot of spiraling guitar riffs and sweet high harmonies. They went south for the galloping, countrified "Poor Heart," which flew by on the fast and furious saloon piano licks of keyboardist Page McConnell and tensile bass lines of Mike Gordon. The slash and burn of "Down With Disease" built to an epic guitar solo crescendo as singer-guitarist Trey Anastasio entered a rarefied zone. The audience - a mix of the scruffy and well-heeled, youthful and grizzled - ecstatically got into the spirit supplying handclaps for "Stash."

The sun went down between sets and the songs stretched out into more layered and psychedelic corners, especially the new "Time Turns Elastic," which felt like several songs in one, some of them captivating. Even as they wandered through the rubbery grooves of "David Bowie" and "You Enjoy Myself" - which revived Gordon and Anastasio's synchronized mini-trampoline routine - they kept the horizon in sight, only occasionally dipping into the no-man's land of mid-tempo aimlessness.