Veteran rock gods crank it up in a new direction 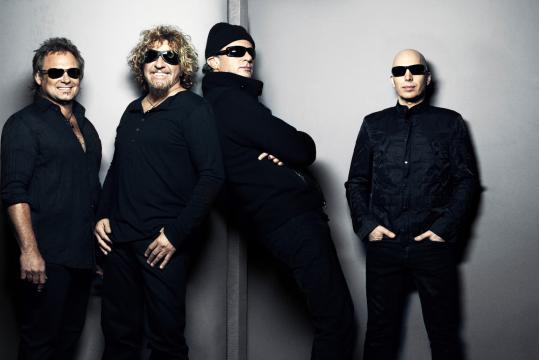 The lineup reads like the setup for some bizarre musical joke: Joe Satriani, Sammy Hagar, Michael Anthony, and Chad Smith walk into a bar . . .

In this particular case, the bar would be former Van Halen frontman Hagar's Cabo Wabo Cantina in Cabo San Lucas, Mexico, and the punch line would be that the unlikely quartet walked out a brand-new band called Chickenfoot.

On the phone from his Malibu home, Smith, drummer for the Red Hot Chili Peppers, sounds as befuddled as anyone by how he, guitar god Satriani, and the non-namesake half of Van Halen, version 2.0, Hagar and Anthony, became Chickenfoot.

"I used to see Sam down in Mexico - he's like the mayor down there," Smith says with a chuckle of famous party animal Hagar. "I went to his club and we hit it off, and from then on whenever I'd see him we'd jam and that was the beginning of it."

When Smith got a break from his multiplatinum day job, he told Hagar, who had been playing with bassist Anthony consistently since departing Van Halen, the time was ripe for the group effort they'd been discussing. "And he was like, 'Yeah, but I'm not a good enough guitar player, we've got to get a real guitar player.' "

Enter Satriani, the influential six-string virtuoso who rose to the top of the solo shredder heap in the '80s with albums like "Surfing With the Alien" and more recently in the news for filing a copyright-infringement lawsuit against Coldplay. (Satriani contends the British band's song "Viva La Vida" lifts "substantial original portions" of his song "If I Could Fly.")

The band's self-titled debut comes out June 5 and is a stew of all the members' influences with straight-up hard rock serving as the common ground between flights of funk and fusion.

Although the band could sell out much larger venues, Chickenfoot decided to road test the music on a club tour, which stops at the Middle East Downstairs - which, with a capacity of 575, is the smallest venue on the tour, according to Smith - next Tuesday. The show is sold out.

"We don't want to come off like, 'Oh yeah, we'll go play this sports arena,' " says Smith, who, at 47, is the youngest member of the group. (Satriani's 52, Anthony 54, and Hagar 61.) "We're playing all of our own music. We're not playing Van Halen, Chili Peppers, Joe, nothing. This is a whole separate thing, and it has to fly on its own merit, so we're taking it to the street like a new band."

Chickenfoot will play larger venues in late summer, but for now, Smith is enjoying the rush of the new at the small gigs. "I haven't felt that in a long time," he says.

That excitement is palpable among fans as well, who sold out the tour in minutes. Josh Smith, the agent who booked the Middle East show for promoter Mass Concerts, has a personal as well as professional interest. A former drummer, he grew up digging Smith's dexterous work with the Chili Peppers. "These guys are legends," he says. "It would be hard to not at least be curious as to what they will be doing together."

One thing Chickenfoot won't be doing is worrying about whether this project makes any money.

"We're all very rich, especially if Joe wins that Coldplay lawsuit and gets some of that Gwyneth Paltrow money," Smith says with another laugh. "Sammy's [expletive] loaded. It's so funny, we're on tour and we're playing 600-seat clubs and we're staying at the Four Seasons and flying on a private plane. It's definitely clearly for the music. No one has anything to prove. Why would you want to do this when you could just kick it? It's because we're really digging the music and having a good time."