Using his wits and Wii, he conducts an orchestra 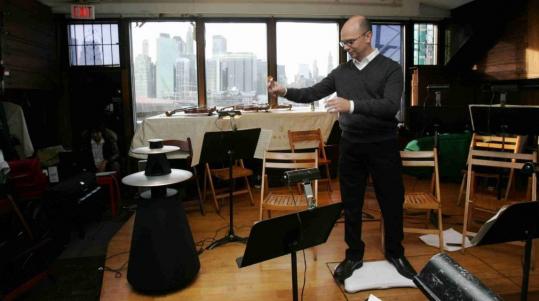 Paul Henry Smith uses a Wii controller as a baton to conduct his Fauxharmonic Orchestra.
By Tristram Lozaw Globe Correspondent / May 16, 2009
Text size – +

Using controllers from the popular Wii video game as a cellist would wield a bow or a maestro a baton, Brookline's Paul Henry Smith presents what's billed as the world's first live digital orchestra performance of a Beethoven symphony Wednesday at Holy Name Church in West Roxbury. Symphony No. 1, Op. 21 - the highlight of a program including the premiere of a Tom Myron aria, works by Hindemith and Brahms, and "Music From Super Mario Galaxy" from Boston's Video Game Orchestra - is the first of Beethoven's nine symphonies that will be presented by Smith's Fauxharmonic Orchestra over the next year.

Though he now roams digital worlds, the Fauxharmonic director's musical training was decidedly traditional. Smith played piano at 8, moving on to cello, composition, and conducting as a teen. He later studied at Tanglewood with Leonard Bernstein and was tutored by noted conductor Sergiu Celibidache, whose insistence on the primacy of the concert hall experience left a lasting impression.

Smith first experimented with digital music in the 1980s at MIT's Media Lab, where he tinkered with Kurzweil samplers and a 14-foot Bosendorfer piano hooked up to a Macintosh computer. "I spent lots of time trying to get those machines to play Brahms," Smith says, "but they were inflexible and unexpressive. A musician knows how to let a sound die out before starting the next phrase. Getting a computer to do that is hit or miss, mostly miss."

Revisiting digital music in 2003, Smith discovered that the wireless game controllers of Nintendo's Wii system could be used to command the digital orchestra with a new flexibility, bringing it out of the recording studio and into the concert hall. With new tools in hand, Smith set to work on the Fauxharmonic Orchestra - part symphonic digital instrument, part multi-timbral classical rave.

Drawing from several million recorded samples of orchestral instruments stored on a computer, Smith prepares the music for performance, giving the score "a rough-hewn shape" while leaving some performance elements undetermined. Programmed according to the score, balance, and shape of the music, laptops play back the arrangement into high-end, Dalek-shaped BeoLab 5 loudspeakers, each delivering 2,500 watts of amplification. Smith uses Wii remotes as his baton, translating arm motion into tempo, timbre, brightness, starts, and stops. By leaning forward on a standing pad he can make sections of his phantom orchestra - violin, brass, percussion - louder.

"I'll point to the trumpets to emphasize sounds or important aesthetic aspects, just as a traditional conductor would," Smith says. "But since I face the audience, pretending they're the orchestra, I've learned to conduct backward, with the sounds coming from behind me.

"Obviously, I'm not the first person to play electronic music through speakers," Smith continues. "But it's usually experimental music, so listeners can't really know whether a piece is succeeding or failing because of the piece, technology, or performer. Beethoven's masterpieces give us well-known entities for judging the quality of the instrument."

It's up to Smith to make it all flex and breathe while delivering the musical power needed to fill Holy Name's 100-foot cathedral ceilings. "Saying that the sound must be more tender means nothing to a Macintosh," Smith says. "I have to take what 'more tenderly' means acoustically - the timing, volume, shaping, sculpting, and balance of notes - and translate that to a computer."

With symphonic music at risk as a living art, Smith sees digital orchestras, which don't require the expense or manpower of traditional ensembles, as a lifeline. "The orchestra is 400 years old and slow to change. But it is changing. And the digital orchestra is a new instrument that eventually will split off and do its own thing, like the piano after the harpsichord or the guitar when electric players like Jimi Hendrix opened up new worlds.

"The Fauxharmonic Orchestra can't replace connecting with other human beings to create music. But this is just Digital Orchestra 1.0. It has no rules yet to restrict imaginations. When versions 3, 4, and 5 come along, we'll see that this was just the beginning."