Far and away Maine's coziest venue 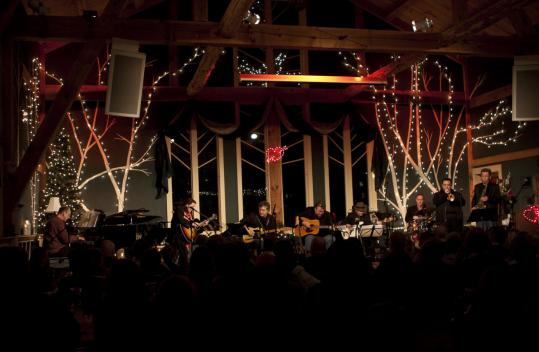 BROWNFIELD, Maine - Especially after night falls, it feels as if you're never going to reach your destination in this sleepy little town. On the three-hour drive from Boston to the Stone Mountain Arts Center, nestled in the shadows of the White Mountains, the GPS loses its satellite signal and MapQuest directions don't list certain roads. But then, Carol Noonan warned that this might happen. "You're probably not going to get any cellphone reception up here, either," she says, almost cheerily.

It's no wonder everyone seems surprised that her venue has become such an arts oasis, so far off the beaten path. It seats just 200 people, tickets can run up to $100 depending on the artist, and yet it's full for nearly every performance. Part of the appeal is the major talent that Noonan brings to the Stone Mountain Arts Center, including Lucinda Williams, Bela Fleck, the Indigo Girls, and Mavis - artists who can easily sell out large theaters and rowdy rock clubs.

"I consider this an intimate place to see a big star in a really special way for a high ticket," Noonan says, referring to the steep prices that are sometimes necessary to net the more expensive performers.

When Noonan and her husband, Jeff Flagg, opened Stone Mountain Arts Center in 2006, they knew they had to hit the ground running. Noonan, a singer-songwriter who's released several albums (including a few on Rounder Records in the mid-'90s), relied on her connections in the music industry to secure some early bookings. She wanted the community (and booking agents) to know she was serious about her new venture.

"We got some pretty good names right off the bat," she says, mentioning country stars Marty Stuart and Mary Chapin Carpenter and bluegrass patriarch Ralph Stanley. "We always knew we'd have to get headliners. The reason I booked really aggressively the first year was because I thought the only way to get people up here is to have an artist draw them up here."

But even getting the artists, who otherwise might play in Portland (an hour away) or Boston, was a challenge. Noonan likes to tell stories about how shocked the musicians are once they arrive at the arts center, which appears seemingly out of nowhere. Country singer Kathy Mattea, for instance, couldn't get her tour bus up the hill that leads from the venue - so she stayed overnight on the bus.

Once you get to the center, though, its charms warrant the extra effort. Literally a renovated barn that eclipses the modest home Noonan and Flagg live in directly in front of it, the music hall is all about its intimacy - from the warm greeting at the door to the preshow dinner served family-style to - if you're lucky - the coveted invitation to hang with the artists in the green room downstairs after the show.

The green room surely must rank among the coziest and most welcoming of backstage areas. Amid the plates of snacks and bottles of booze, there's a pool table, a record player with rows of albums - including those of some of the artists who have performed here (Judy Collins, Richard Thompson, Ladysmith Black Mambazo) - and a TV with a DVD selection. The guest book is full of praise and little hand-drawn illustrations thanking Noonan for her hospitality.

"This is one of my favorite gigs ever, and we've played a lot of gigs. You really feel the love here," wrote Emily Saliers of the Indigo Girls.

"Where have you been all my life? This place really is a haven in a sea of one-night stands," Shawn Colvin marveled back in 2007.

Noonan says she has noticed how some of the bigger national acts tend to adjust their performances once they realize the Stone Mountain Arts Center isn't your typical concert hall.

"When Lucinda [Williams] played here, you could tell she started with her normal show, and you just can't do that here," Noonan says, "because there's not that usual separation between audience and artist."

Likewise, the artists often pick up on the different kind of crowds Stone Mountain attracts.

"It's like having the cream of the crop of your fans because the place is so small," says Williams, who sold out the venue last year and says she would gladly return. "So you end up with people who really want to be there to see you. And the food and good wine they served us, before and after the show, was incredible. I thought to myself, 'If only every place we play could be like this.' "