THIS STORY HAS BEEN FORMATTED FOR EASY PRINTING
Critic's notebook

Eminem reemerges, but is his moment lost? 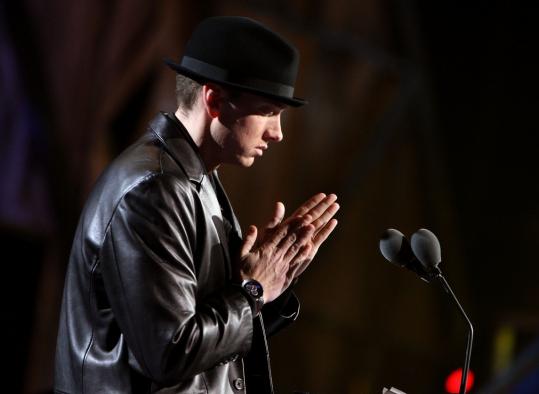 Eminem, who spoke at the induction of rappers Run-DMC at the Rock and Roll Hall of Fame in Cleveland last month, has a new album, ''Relapse,'' scheduled for release May 19. (Stephen Lovekin/Getty Images)
By Sarah Rodman Globe Staff / May 3, 2009
Text size – +

Whether you loved him or hated him, there was a time when just about everyone had an opinion about Eminem. To a portion of the pop music audience he was a sometimes incisive, sometimes sophomoric provocateur able to channel his senses of humor and rage into stunning rhymes. To others he was a politically incorrect fount of anger and hate who, no matter how clever, didn't deserve a spotlight.

In truth, for fans like me he was both: a complicated artist and person, which was what made him so fascinating. He could induce tears with poignant visions of a dysfunctional childhood, elicit snickers for silly potty humor, and raise goose bumps with murderous images in the space of a few songs.

But in the five years since the man born Marshall Mathers re leased his album "Encore," the Grammy and Academy Award-winning Detroit rapper has almost completely fallen off the pop culture radar. Is it possible that the polarizing hip-hop star waited too long to reemerge? That a country fragmented by politics, crisis, and technology can no longer rally around one controversial figure? With buzz for his fifth album, "Relapse," due out May 19, on simmer instead of high, could it be that Eminem is over?

Commercial response to the album's advance singles show that fans are still curious.

In February "Crack a Bottle," featuring mentor Dr. Dre and protégé 50 Cent, set a record for first week digital sales, zooming from 78 to No. 1 on the Billboard Hot 100 singles chart in just one week. Last week the second single, "We Made You," debuted at No. 9 with a bullet.

The numbers don't tell the whole tale, however, since the tunes themselves have been subpar. "Bottle" was shockingly plodding given that it was supposed to be a party starter, with the trio tiredly rhyming about chicks, cars, and champagne. Even among Eminem's most inane rhymes, "Crack a bottle/ let your body waddle/don't act like a snobby model/ you just hit the lotto" ranks low.

"We Made You" is scarcely an improvement, with an equally sluggish beat, herky-jerky rhyme scheme, and dated potshots at celebrities like Jessica Simpson, Sarah Palin, and Kim Kardashian. The single commits the cardinal sin: It's boring. (Eminem is actually much funnier in off-the-cuff exchanges in MTV's behind-the-scenes special about the making of the video.)

A third track, the much darker "3 a.m.", was recently leaked on the Web. Again, it shows the rapper addicted to narcotized beats and limp grooves. He used to be able to turn a slow tempo into a positive on hits like "My Name Is," but now he just lacks oomph. It features yet another shout-out to Kardashian's posterior and some very un-Disney-like thoughts about "Hannah Montana." (Plus the chorus repeats the redundant phrase "3 a.m. in the morning," a pet peeve of mine.) While the horror story of a pill-popping (been there) murderer (done that) boasts a few chilling images and biting lyrical interludes, it's mostly DOA.

Musing on the "stagnant" state of hip-hop in his 2008 autobiography, Eminem wrote, "Whether I'm someone's favorite rapper or not, whether I'm thought of as one of the best . . . I am one of the most personal rappers." That's the problem in a nutshell; the new songs that Eminem has put out so far, to paraphrase the man himself, feel so empty without more of him in them.

If he needs incentive, he might want to take note of 23-year-old Asher Roth breathing down his aging neck. Roth is obviously a fan who has picked up a few moves from one of his heroes, whom he name-checks on his debut record "Asleep in the Bread Aisle." Although not as exciting as Eminem was at the same point in his career, Roth seems ready to take up the "designated white rapper" mantle with songs like "I Love College" that speak directly to at least one segment of Eminem's audience: hip-hop-loving college boys.

Whoever his audience might be, Eminem will have to come up with more interesting material to command their attention. While the recent songs might tell us the kind of TV he's been watching, none gives a glimpse into what he's actually been feeling during this recording hiatus. And he's had no shortage of emotional triggers: dealing with addiction, the seemingly final dissolution of his marriage to the infamous Kim, and the death of his close friend Proof. He's clearly done a lot of living and learning, yet that isn't apparent in the rhymes we've heard to date. The cringe-worthy Eminem has resurfaced, but not the clever wordsmith willing to display vulnerability and dig for emotion. Only the album cover, an image of the rapper made out of a mosaic of pills, hints at the demons he has previously illuminated.

Songs from "Encore" like "Mockingbird," detailing his efforts to shield daughter Hailie from her parents' relationship drama, or "Evil Deeds," his fidgety tale of abandonment, were like chapters in a musical autobiography. Thus far, the new songs are just titles.

Besides the charts, the other place Eminem appeared recently was in Cleveland, to induct his childhood heroes Run-DMC into the Rock and Roll Hall of Fame. Down to a fighting weight from his recent doughy look, and with a mischievous glint in his eye, Eminem offered a smart, funny, far-reaching, insightful, and emotional homage to the hip-hop pioneers.

He called the trio's music "something fresh, something tough, something dangerous, something beautiful, and something unique." Those are words that could have been used to describe Eminem at his peak. Let's hope that this is the Eminem who shows up for the remainder of "Relapse." That guy knows how to put on a show worth talking about.