Taking the kids to the coffeehouse 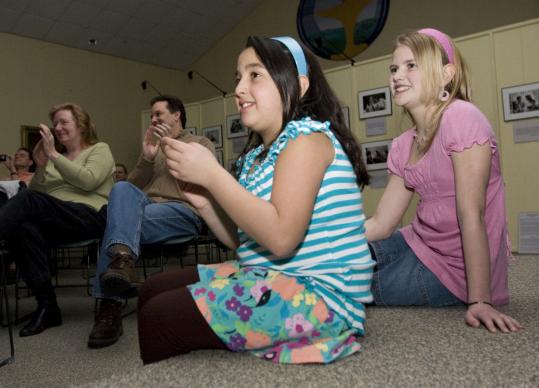 Katelyn d'Entremont, 11, (right) of Franklin and Sarah Randall, 9, of Wrentham at the Circle of Friends Coffeehouse. (Rose Lincoln for The Boston Globe)
By Scott Alarik Globe Correspondent / April 5, 2009
Text size – +

FRANKLIN - On a chilly March Saturday night at the Circle of Friends Coffeehouse, Elizabeth Randall stood in the lobby chatting with her husband, Doug, while they kept an eye on their 9-year-old daughter Sarah, who was running around like she owned the place. They were there to see a concert by Katryna and Nerissa Nields, the former major-label rock stars turned nationally popular folk duo. The coffeehouse is an all-ages spot, so there was no need to leave Sarah at home with a baby sitter.

"I just love it here," Elizabeth Randall said. "It's family-friendly, but it's not Chuck E. Cheese. The kids can come and be part of what the adults are enjoying."

At first her husband was worried the coffeehouse experience might be "kind of the campfire 'Kumbaya' thing," but he's been pleasantly surprised. "I'm just amazed at how top-notch the talent is," he says. "Plus we're five minutes away, parking's free, and we can bring the whole family."

"That's what I like the best," his daughter chimed in. "It's for everybody."

The Randalls are among many families discovering the Boston area's growing bumper crop of suburban coffeehouses. The Boston Area Coffeehouse Association began in 2000 with about a dozen member venues offering monthly or biweekly folk concerts in local churches (Circle of Friends is at the First Universalist Society); now there are 42. It's not surprising families are seeking out these concerts in this difficult economic time. With tickets under $20, they make for an affordable night out. "You can get two tickets here for what it costs to park in Boston," said Circle of Friends director Jake Jacobson.

The popularity of coffeehouses in the area doesn't go unnoticed by the musicians who perform in them. "I think of 495 as this amazing road paved with community coffeehouses," Katryna Nields said after the show. "There's nothing like it anywhere else in the country. It feels very New England to me, sort of town-meeting-ish, with everybody gathering at the local church to have their entertainment."

The Nields sisters performed their two-hour set on a low stage, almost at eye level with the crowd of about 125 kids, tweens, boomers, and seniors. Behind them, a long window looked out on softly lit woods.

The Nields are both moms, and their songs highlighted the reliable joys of family love: "When love gets old and you think it's cold, you're looking in the wrong directions," they sang. Another song concluded with the quintessential modern parent's mantra: "When does the easy part start?"

The women wove folksy patter between their gorgeous harmonies, treating the crowd more like friends than fans. Katryna told the story of how her "apocalyptic over-worrying" turned a nocturnal skunk odor into a nightmarish fantasy of killer critters in the kitchen. When her 7-year-old woke up worrying, Katryna transformed into comforter-in-chief, tucking her child back into bed and then sending her husband downstairs to check, just to be sure.

During intermission, audience members perused a long table of home-baked desserts, all $3 each, ranging from the dependable cherry cheesecake to seductive hybrids like truffle coconut macaroons and chocolate bread pudding.

"I love their harmonies," Elizabeth Randall said, "and I can so relate to their stories, like the apocalyptic mom at 3 a.m." She chuckled dryly. "That's totally me."

Her daughter Sarah was also enjoying the show. "I like that they're not just people who perform; they're people who have husbands and kids, too." Seconds later, she and her friend Katelyn d'Entremont, 11, started fretting about how Hannah Montana was going to get out of her latest scrape.

Doug Randall smiled at the abrupt topic shift. "This is a good change of pace from Hannah Montana for her," he said. "It's great for kids to see people who can just stand up there and make beautiful sounds, without all the voice-altering technology, the remixing, redubbing."

For Nerissa Nields, the family atmosphere at these coffeehouses is key. "Since I became a parent, I crave society with other parents, commiserating about how hard and wonderful and confusing it is," she said after the show. "And that's connective to audiences in these coffeehouses, I think; they want to see themselves on stage."

The whole thing explores whether Miley Cyrus can afford to bare her true self to the world. Does she at last remove Hannah's blond wig or not?
Upcoming coffeehouse performances
Your comment is subject to the rules of our Posting Policy
This comment may appear on your public profile. Public Profile FAQ