When husband-and-wife duo Mates of State go on tour, the kids do too 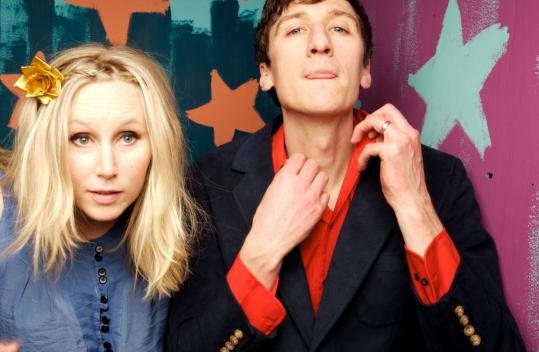 ''I think the jury's still out whether we're square or crazy or both,'' says Jason Hammel, pictured with his wife and bandmate Kori Gardner. (CRACKERFARM)
By Sarah Rodman Globe Staff / April 3, 2009
Text size – +

Like most young musicians just starting out, Jason Hammel and Kori Gardner weren't thinking much beyond their next gig back in 1997.

"The farthest thing we were thinking about was family," says Hammel, half of the indie-pop duo Mates of State, which plays the House of Blues Tuesday night. "We were a couple of punks that were like, 'We can go on tour! We don't care! We'll think about responsible things later when we're older!' "

"I wouldn't say old," Hammel says with a laugh, on the phone from Stratford, Conn., where they live. But old enough that the pair - who are now married and have two young daughters, Magnolia, 5, and June, almost 2 - have new concerns about life as touring musicians. "We do have to worry about when these kids are eating and if they are receiving love and if they're tired and what time nap time is. And when you're playing rock 'n' roll, you just don't really care about those things; it's like [to hell with that]! I just want to be free!"

The duo - she plays keyboards, he drums, they both sing - have gladly traded certain freedoms to keep the family together, touring with their young kids, and a nanny, and forgoing "ripping it up in the club," as Hammel puts it.

"I want my kids to be OK. I don't want them to be quote, unquote normal necessarily, but I want them to feel like they're normal and then just give them lots of experience to be able to deal with whatever's thrown at them. And I feel like our lifestyle and the fact that we parent and travel a lot is giving them that."

All of which sounds perfectly reasonable to Mates of State, who have steadily amassed fame and critical acclaim since their first full-length release, "My Solo Project," in 2000. Their most recent release, 2008's sublime "Re-Arrange Us," which features musical and production assistance from friends and musical kin dred spirits such as Spoon and Death Cab for Cutie, continues to shine a light on the pair's gifts for precious pop harmonizing and memorable songwriting. The duo is neither musically nor temperamentally the type that would be all about partying on tour, but since Gardner began writing the blog "Band on the Diaper Run" on Babble.com about their adventures in rock 'n' roll parenting, they have caught some people by surprise.

"Yeah, it's just like 'rock 'n' roll [and] baby food? What?' " says Hammell, laughing, as he recalls some of the media coverage, as if the two were somehow mutually, exotically exclusive. "In the press they pit those two things against each other. 'How can they do this? Are they square or are they crazy?' It's one or the other. It's hard to reconcile, and I think the jury's still out whether we're square or crazy or both."

Carl Newman, who serves as leader of the venerable pop collective the New Pornographers and works as a solo artist under the moniker A.C. Newman, thinks it's neither. "They really seem like a model for life," says the musician, who had Hammel and Gardner perform at his 2007 wedding and sing backup on his recent solo album, "Get Guilty." (Fun indie pop fact: The other performer at Newman's nuptials was New Pornographer bandmate Neko Case. "We were definitely trying to outdo all the other weddings," Newman says with a laugh.)

Musically, Newman thinks the duo improves with each release. When they play live, he says, "It's like this very, very small, well-oiled machine. It sounds like more than what two people should be able to do." And he's impressed by the stability in their personal lives. "I keep waiting for the weird, dark skeletons to show up in the Mates of State. There's got to be something twisted going on there. But there isn't. They're both these cool, talented, good-looking people."

Hammel isn't ready to take on the mantle of hipster family role model just yet, though. "I don't necessarily see it as trailblazers more than I see it as outsiders, like 'Oh, we're not cool.' But then I get home and I don't care. I have people around me that I love and that love me, and I can always work on art. I don't have to work for anybody else except myself and my family."

And that, he says, will help him and his wife avoid a "Behind the Music"-type trajectory. "A lot of times if you look historically at aging rock stars, it's not a pretty place where those people end up. And this is a path that can maybe end up to be fine, and at the same time we can get better at songwriting because it's a supportive environment rather than a spiral down into drugs and alcohol, and I'm old, and I've got a terrible rocker haircut that I should've not had because I'm 60, and my kids hate me because I was a drunken fool in rock 'n' roll," he says, chuckling.

"I feel like this is one option for it to work out OK in the end."

MATES OF STATE With Black Kids

At the House of Blues Tuesday at 8 p.m.