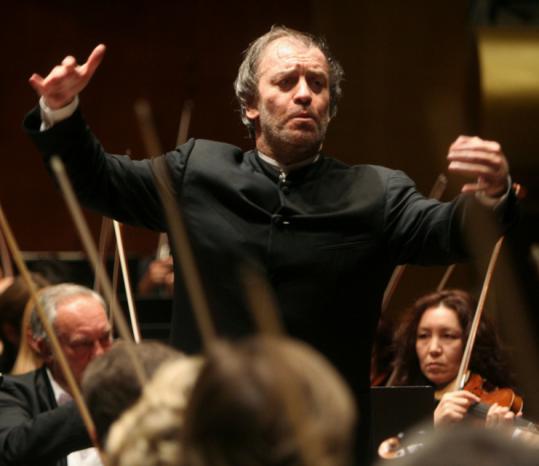 The tireless Russian conductor Valery Gergiev moves through the musical world with the speed and intensity of a one-man weather system. In recent days he has been leading the LSO, where he is principal conductor, on a whirlwind and suitably Gergiev-esque national tour: eight cities and 13 performances in 16 days, including a complete cycle of the seven Prokofiev symphonies at Lincoln Center.

Wednesday night in Symphony Hall, Gergiev and the LSO made their keenly anticipated local appearance, presented by the Series. For the occasion, they plucked off the most popular of Prokofiev's symphonies - the Fifth - and paired it on a program with Beethoven's "Emperor" Concerto featuring the young Russian soloist Alexei Volodin. A large crowd jammed into Symphony Hall - the last time the LSO performed on the Celebrity Series was 1983.

The opening of the concert was a bit anti-climactic, with Volodin giving an accomplished but unexceptional account of the "Emperor" Concerto. Passagework in the outer movements was fleet and clearly articulated, but the poetic depths of the middle movement were left untapped, despite a ravishing orchestral introduction in which the strings played with a beautifully veiled tone, dark and velvety.

The Fifth is Prokofiev's wartime symphonic masterpiece. The composer himself conducted the premiere in Moscow in January 1945, and everyone likes to tell the story of how, just before the downbeat, the silence in the hall was punctured by the celebratory blasts of artillery marking the Soviet crossing of the Vistula and the assault on Nazi Germany. The work itself is at once epic and enigmatic, full of big swaggering themes that have a way of taking unexpected turns or succumbing to the dark undertow that can be felt in all four movements of this outwardly affirmative symphony.

As a passionate Prokofiev champion and a conductor known for whipping orchestras into a howling frenzy, Gergiev seemed in relatively subdued form Wednesday night but he still managed to lead a potent, sometimes smoldering reading that communicated the music's many complex valences. The orchestra's sound was deep, rich and substantial, if not always as chiseled as one might have expected.

The third movement brimmed with pathos, and the funeral march was masterfully deployed. So was the conclusion of the fourth movement, with its maniacally repeated patterns and its chilling coda. The strings sounded effectively lean rather than lush, the brass stentorian. Gergiev's grasp of this music made one wish it was an all-Prokofiev program.