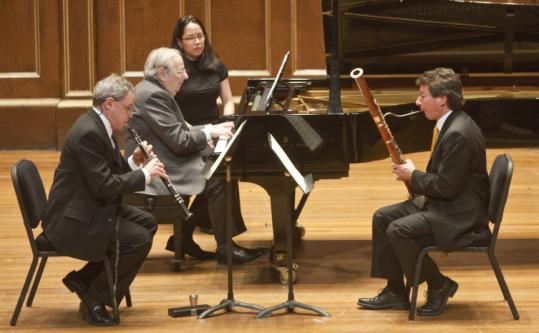 André Previn clearly loves his job. If he moved gingerly to the piano for Sunday's concert with the Boston Symphony Chamber Players - the one-time Hollywood wunderkind is now nearly 80 - once there, he was in his element, joking with oboist John Ferrillo, nonchalantly navigating the keyboard, basking in the camaraderie of applause.

Even an intra-movement cellphone ring was a source of amusement, not irritation. Previn's geniality carried over into a concert that, by and large, took a similarly easygoing tack.

Previn's 1994 Trio for Oboe, Bassoon and Piano (replacing a previously announced premiere, rescheduled for an August Tanglewood concert) is an unapologetic bricolage. The opening movement, for example: chunky modal-jazz industry, some neo-classical repose, a lyrical central-casting love-theme, all fluently recombined. If the materials seem familiar, their employment is effortlessly dexterous - the slow movement's austere daisy-chain of solo piano and wind-duet paragraphs unfolds with unobtrusive deftness.

Previn later returned to the bench in Francis Poulenc's Sextet for piano and winds. Poulenc's effervescence still flummoxes standard Western associations of "deep" with "somber"; Steven Ledbetter's program notes described the Sextet as "hardly profound," but Poulenc's profundity is his holistic sympathy for the varied sustenance of the human soul, light and dark, holy and temporal, droll and rapturous. This performance also seemed studio-lit, the entire set in undifferentiated highlight and focus, though some faster sections, especially those featuring James Sommerville's high-wire precision horn, had more grit and bite.

In between those alloys was a distillation, Debussy's late-career Sonata for flute, viola, and harp, the composer recapitulating his lush style with spare, sure strokes. Elizabeth Rowe (flute), Steven (viola), and Ann Hobson Pilot (harp) offered a close-up reading in which isolated moments made the strongest impressions: the flute melting into the viola's initial entrance, the harp distantly tolling over the viola's rustic drone, flute and viola chanting amid a cascade of harp glissandi.

Brahms seems to have become the BSO's house red wine as of late; Sunday's concert closed with the G-major String Quintet, op. 111. For the most part, the players opted for extroverted, garage-band energy, a vehement brio, though the Allegretto third movement showed a polished restraint. The foot-stomping finale eventually brought discretion and vigor into diverting balance.