For years, there have been whispers of a lost treasure-trove of country recordings hidden away somewhere in the Northeast. Tapes of George Jones, Dolly Parton, Hank Williams Jr., Loretta Lynn, Johnny Cash, Roy Acuff, Tammy Wynette, Buck Owens, Charley Pride, and other icons - a veritable all-star spectacular - were among those rumored to be languishing in obscurity.

"Everybody had heard about these tapes," says J Franze, a North Shore audio engineer who has worked extensively in Nashville. "But nobody really believed they existed."

Last year, the myth became reality. Hundreds of tapes were pulled from a barn in southern Pennsylvania, recordings made at high schools, dances, fairs, festivals, and auditoriums in Pennsylvania, West Virginia, Maryland, and elsewhere. It was a fantasy collection, more than 1,000 unreleased live recordings by country music royalty. Most were made in the late 1960s and early 1970s, with a few dating to the 1940s, including shows by Acuff and Grandpa Jones captured with wire recordings.

They were all recorded by Ken Alexander, who ran a small sound services company near Dry Run, Pa. Alexander traveled to concerts throughout the region, setting up sound systems at the various venues. Apparently, he decided to do some recording while he was there.

Those tapes now belong to producer Richard Pittman, of Pitt/Penn Productions in Los Angeles, who has worked with Franze on several projects and hired him to clean up and restore the long-lost tapes. Pittman, who also works as an actor under the name Richard Penn, grew up near Philadelphia. A "musician at heart," he says, he had been in pursuit of the lost barn stash since first hearing the rumors of its existence.

Years ago, a highway worker named Matt Whitsel fixed Pittman's tire on the Pennsylvania Turnpike. The two stayed in touch, and when Whitsel told Pittman a story he had heard about the mythical tapes stored in the back of a barn, the producer asked Whitsel to track down the mystery owner and set up a meeting. The barn's owner, who had taken over the property when Alexander died, didn't know much about the tapes or why anyone would want them.

"At first the owner didn't want to talk," Pittman says. "Finally, after hearing that Matt was a local, he was willing to give us a sample tape."

Franze checked out the sample, found it was a reel-to-reel recording of a show by Grand Ole Opry star Roy Acuff, and called Pittman to tell him it was the real thing. That was enough to prompt Pittman's offer for the whole stash.

"We didn't hear back," says Pittman, who didn't disclose the amount. "But about a year later, he called and asked us if we were still interested."

Last June, hundreds of tapes - two pickup truck loads - were hauled away from the barn after sitting for four decades in its dusty shadows. Once they arrived at his Wakefield studio, Franze began sorting, transferring, and restoring tapes from a blind sample of 75 taken from the main stash, each up to two hours in length. Since the tapes aren't compatible with standard professional studio machines, he located an old Pioneer deck and hooked it up to his Pro Tools rig to make digital copies. "They're fairly good-quality recordings, considering," says Franze.

It took months just to transfer the material. Tapes that were too tight would snap. Some were crinkled and had to be flattened and processed several times. Some ran out in the middle of songs and were spliced with other takes. Franze and his assistants, Terry Gowing and Ben Greenspan, also had to make sense of what was actually on the tapes. They checked names of songs, performers and guest musicians, recording quality, dates, and venues against the info on the tape boxes - if there was any.

"If [Alexander] didn't have time to document the recordings during the show, he just didn't do it," says Franze. "Those tapes were a crapshoot. We'd put one on and say, 'OK, what are we going to listen to today?' "

A photo of mixing console, along with his typed sound services rate sheet - recording was $1.50 extra - was found with the tapes. His log lists a 1946 show by Acuff at "Valley View Park" as "#5," and the barn stash included a wire recording from the same era by Grandpa Jones.

As the restoration project unfolded, it was clear to Franze that he was listening to country music treasures of historical significance. For every dud, like Alexander's unmarked recording of an automobile race, there were dozens of surprising finds.

Gems include Porter Wagoner tapes spiced with vocals by Dolly Parton and, according to announcements on another tape, a young Crystal Gayle sitting in on her older sister Loretta Lynn's show the night before Gayle started recording her first album. Then there's clever, funny John Hartford singing "(Good Old Electric) Washing Machine." A Feb. 10, 1968, show in Altoona, Pa., features Hank Williams Jr. sounding just like dad as he plays a set with Hank Sr.'s original band. Many of the recorded shows feature as much story- and joke-telling as they do music, as with Little Jimmy Dickens's intimate conversations with his audience. The list also includes recordings by Roy Clark, Earl Scruggs, Mel Tillis, Ernest Tubb, Osborne Brothers, Jimmy Martin, Conway Twitty, and the Lewis Family gospel singers.

"Another favorite is Jerry Lee Lewis," says Franze. "He shows up late, tries to hide the fact that he's drinking onstage and finally says, 'Screw it, I'm drinking,' forgetting lyrics along the way. It's great, just him doing his thing."

"One thing that stood out is the musicianship, how great everybody played," Franze continues. "These are live recordings and there are hardly any screw-ups. And now that we've cleaned up the audio, you can hear all of the instruments clearly, the bass guitar, everything."

At the very least, one could assemble a few dozen killer country compilations from this gold mine of material. But for now the collection appears headed for , where the lost tapes and premastered restorations may hit the auction block soon. Since the rights and royalties involved in releasing the collection to the public could prove prohibitive, it might take a hall of fame or Smithsonian-type institution to sort out the tangle.

"We are well aware of the cultural impact," producer Pittman says. "And wouldn't it be nice if the tapes were to find a home in Nashville, where I think they belong."

According to Michael Lipton, executive director of the West Virginia Music Hall of Fame, which recently had some of its recordings and rare instruments appraised, even experts are often at a loss to put a monetary figure on archives of such cultural value. "Tapes like these can offer a rare, unfiltered glimpse into artists' music and personality or reveal their early origins," he says. "There's a limited number of recordings of these artists from that time period and this collection appears to be fairly broad."

Franze has finished 50 of the tapes, and no one knows what nuggets remain unearthed in the hundreds of recordings that remain. 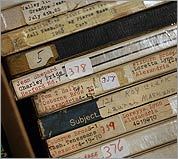