He's rocking and running for a cause 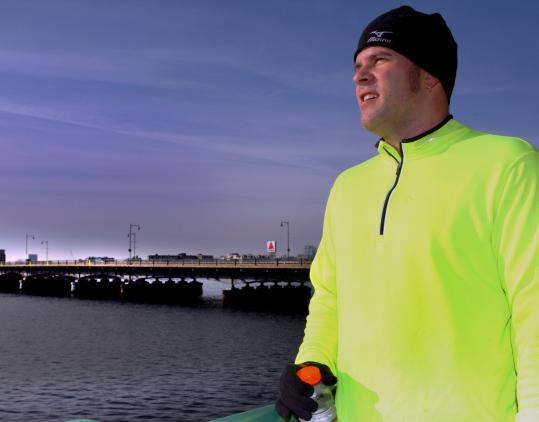 Andy Milk of the Vital Might was inspired to run road races by his mother's battle with cancer. (WENDY MAEDA/GLOBE STAFF)
By Jonathan Perry Globe Correspondent / March 20, 2009
Text size – +

Some things just don't go together: Cats and dogs, for instance. Or Boston and New York - and by extension, Red Sox and Yankees fans. As for making late-night rock music and running early-morning marathons, well that's just absurd.

Let's face it, athletic prowess is not the first thing that leaps to mind when you think of rail-thin rock musicians in skinny jeans with studded belts and artfully disheveled hair.

And that's what makes Andy Milk so unusual. Milk, singer-guitarist for the Boston-based trio the Vital Might, is training for his third Boston Marathon. Suffice it to say that his personal life and loves have collided in uniquely atypical fashion.

"I did track in high school and played football - that was my big thing," says Milk, 33, a Cape Cod native who lives in Cambridge. "I don't think I ran more than 3 or 4 miles until I did my first marathon in 2003."

It all started when Milk's mother, a retired elementary school teacher, was diagnosed with breast cancer nine years ago. Milk's niece suggested he do a benefit walk on the Cape to raise money for cancer research, and the idea stuck with him. These days, with his mom still battling the disease - and responding to chemotherapy - Milk has extended his fund-raising reach to include both running and rock music. "The opportunity to [run] for a cause," he says, "was night and day in terms of how much more rewarding it was - for something that's personal, for my family."

Next Friday at Oliver's Nightclub (inside the Cask n' Flagon) his band and three other local outfits - Build a Machine, Forgetful Jones, and Spectator - play the second Rock N' Run fund-raiser for cancer research. This time he's hosting the event with his girlfriend, Jennifer Simckowitz, a long-distance runner who will also compete in the Boston Marathon (to be held April 20). Simckowitz's cousin, a former Navy Seal, succumbed to cancer two months ago.

It hasn't been easy, and we're not just talking about the runners' struggles to cope with cancer in their families, or even those grueling double-digit mile runs. "It's definitely getting busier now," Milk says of the preparation that's underway for an event that will also include prizes like Red Sox tickets and a Fender Stratocaster guitar, among other goodies (go to www.rockandrun.org for more info). When you add Milk's Web software design and consulting business into the mix, not to mention his regular rehearsals, shows, and recordings with the Vital Might (so far, the band has self-produced a pair of albums), it's a full day indeed. But the payoff is huge - emotionally as well as financially. Milk raised $5,000 at the first event and hopes to raise about $10,000 at this year's event (the proceeds go to the Dana Farber Cancer Institute).

What's not being left to chance is Milk's readiness to run come next month. Milk and Simckowitz are logging about 30 miles a week - training either with each other or with a group of fellow runners who make up this year's Dana-Farber Marathon Challenge team. Workouts last anywhere from 3 to 14 miles. (When we talk, Milk is gearing up for his longest training route yet: an 18-mile, three-hour trek from Cambridge to Watertown).

The snow and the slush have made getting in shape especially tough this winter. And the freezing temperatures certainly haven't helped. "Anything above 20 degrees we've been fine with, and at this point, I can walk outside and tell you, by plus or minus one degree, how cold it is," Milk says.

Weathering adverse conditions is something Milk's gotten used to. He says a good portion of his songwriting with the Vital Might - a pensive, dramatically inclined trio that rocks heavy and hard - is an outgrowth of his family experiences. It hasn't always been that way. Milk's first band from a decade ago, Johnny Wishbone, was "fun rap-rock, very light, and about having a good time. I was in my early 20s and that's what I was writing music about.

"Back then, I think I hoped to write something with a little more meaning," he says. "But to be honest, my life was pretty smooth sailing. It's tough to write about things that are a little deeper and darker when you haven't experienced them yourself."

TGIF WITH DMZ It's Friday, kids, and Boston's erstwhile proto-punks DMZ are here for a rare show to ring in the weekend right. The band's classic lineup - Jeff Conolly, JJ Rassler, Peter Greenberg, Rick Corracio, and Paul Murphy - hit Church (69 Kilmarnock St., www.churchofboston.com) tonight at 10 p.m., flanked on either side by Vagiant (9 p.m.) and Unnatural Axe (midnight). Tickets are $15.

Know about something cool on the local scene? E-mail Jonathan Perry at roughgems@aol.com.

THE VITAL MIGHT, BUILD A MACHINE, FORGETFUL JONES, AND SPECTATOR At the Rock N' Run Benefit Event March 27, at Oliver's Nightclub at the Cask n' Flagon. Tickets are $10, $20, or $50 at www.rockandrun.org.