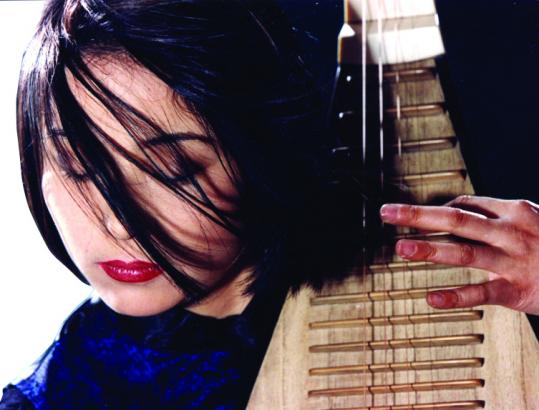 'YO YO PARK," the sign across from Symphony Hall instructed arriving cars. "$20."

This may not have been the official billing of "The Silk Road Ensemble with Yo-Yo Ma," but it accurately described the draw for the crowd. The superstar cellist is first among equals in the group, which, on Sunday and Monday, offered Boston two programs of music inspired by the ancient trading route connecting Europe, Central Asia, and China. Ma was just one of the band, leading only via occasional emcee duties or to prompt other players into the spotlight (for example, goading Wu Tong into a virtuoso solo on the sheng, a Chinese mouth-organ, for a crowd-pleasing encore on Sunday).

The centerpiece of the concerts was Monday's performance of "Layla and Majnun," the venerable Arabic tale of doomed love, adapted in 1908 into what has become the national opera of Azerbaijan by Uzeyir Hajibeyov. An original multiculturalist, Hajibeyov leavened conventional operatic structure with mugham, traditional semi-improvised Azerbaijani singing.

Ensemble violinist Jonathan Gandelsman distilled the opera into a six-part chamber cantata; his 11-player arrangement achieved both an opulent, profusely embroidered surface, matching the vocal ornamentation, and a raw drama. The singers, the legendary, phenomenal Alim Qasimov and his daughter, Fargana Qasimova, were similarly, startlingly immediate.

On Monday, Gabriela Lena Frank's "Ritmos Anchinos" made a far-flung connection with Peruvian music; its cheerfully dissonant, asymmetrical foot-stomping didn't project a strong profile, but made ample use of Wu Man's charismatic flair on the pipa, strumming with self-possessed intensity. Evan Ziporyn's "Sulvasutra" had the most personality, with Sandeep Das's tabla emerging out of primordial, string-glissando chaos into a looping, sweeping landscape.

Most selections followed a common pattern: an opening featuring an exotic instrument in rhythmically free, improvisation-like recitative (or actual improvisation, as with the opening of Sunday's concert, Umezaki and Tong trading shakuhachi and bawu lines as they made their way down the hall's aisles), gradually moving into a strong, rhythmic ensemble groove. In jam-session-like numbers, Rabih Abou-Khalil's "Arabian Waltz," Shane Shanahan's "Saidi Swing," and Osvaldo Golijov's high-octane arrangement of Sapo Perapaskero's "Turceasca," the group was at its best, with an easy precision, multilayered rapport, and a generous energy.

Translation into written arrangements meant the Western classical lens never fully disappeared, but the result had a hybrid exuberance, not unlike Debussy or Ravel's Spanish-tinged showpieces. Even vague imperialist overtones, the group ensconced within Symphony Hall's gilded, "Beethoven"-crowned proscenium, could find a parallel: Historical knowledge about the Silk Road is largely due to the efforts of European archeologists.

The most rewarding moments were when the web of individual interactions between the players hinted at the rich complexity of the back-and-forth between the Silk Road's history and its re-created image in both Eastern and Western imaginations. Sunday's program concluded with Siamak Aghaei and Colin Jacobsen's near-rock instrumental arrangement of the Persian folksong "Ascending Bird," flying ever higher toward the sun. The parallel with the Icarus legend was provocative and noteworthy.

But one could also connect it to the origin of the term "Silk Road" itself: It was coined by the German geographer and geologist Ferdinand von Richthofen. His nephew was the Red Baron.

Presented by Celebrity Series of Boston

At: Symphony Hall, Sunday and Monday