Despite the poor economy, mobile DJs are in demand 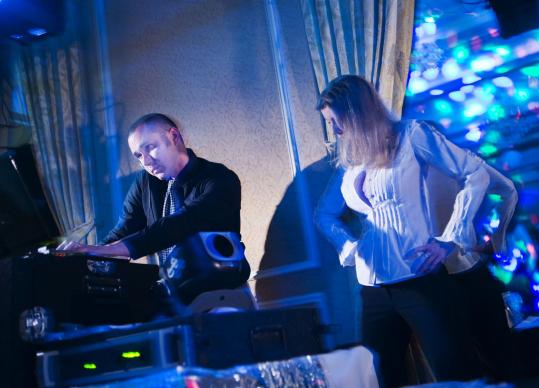 Having unloaded his speakers, two CD players, and two fat books filled with 5,000 CDs, Jason Bohanon is ready to get the party started at the Elks Lodge in Melrose.

"OK, we're going to power up the dance floor," says Bohanon, the 35-year-old owner of A True Family Affair DeeJay Service, based in Lynn. "There is a request book up here."

As Bohanon played Beyoncé's "Irreplaceable" and Kanye West's "Heartless" at the Sweet Sixteen celebration for twins Barbara and Sasha Valliere, six teens surrounded his laptop, which listed the songs in his CD arsenal. Before there is a lull in the action, Bohanon turns on the fog machine and takes to the dance floor to teach the teens the Cotton-Eyed Joe line dance, the first of four dances he would teach that night. At the end of the four-hour gig, Bohanon had earned $400 plus a $60 tip.

Mobile DJs - those who play at weddings, bar mitzvahs, birthday parties, school dances, and corporate events - work in one of the most lucrative areas of the field. They may not acquire the fame of a radio DJ, but the money is good. The average rate for mobile DJs nationally ranges from $600 to $900 for a four-hour event, according to the National Association of Mobile Entertainers (NAME). That's substantially more than the $25-per-hour rate that entry-level club DJs earn (though famous club DJs can earn as much as $5,000 an hour).

The mobile DJ business is holding up despite the recession. Some DJs have seen business rise compared to a year ago. Some of the increased work is the result of DJs hustling more for jobs, but some of it reflects consumers' reluctance to hire bands, which are usually more expensive. At the same time, DJs face new competition these days from people who have lost their jobs or are trying to make extra money on the side, as digital music has made it easier for people to get into the industry.

"We're now competing with iPods and bottom feeders," says Raffi Kebabjian owner of DJ Raffi in Watertown. "People with full-time jobs who will go out for $500 or $600, because that's what they make after taxes for the whole week."

Ostensibly, no training is necessary to become a DJ, but all the DJs interviewed started their careers at their college radio stations. Although amateur DJs may use an iPod, the basic equipment of a professional DJ includes an amplifier, two speakers, a music player, a wired and wireless microphone, and a basic lighting system, says Robb Smith, owner of the FAME DJ School in the Tampa Bay area. That set up may cost $1,200 to $1,500 for an entry-level DJ.

NAME has seen its membership double to 10,000 compared to five years ago, says Steve Gomez, director of membership and marketing at NAME. "Weddings, bar mitzvahs, private parties have really picked up," he says.

Peter Hallisey, owner of Boston Sound Choice Events in Waltham, says work is up about 10 percent as a result of him doubling his advertising and promotional efforts. Tom Bruhl, a mobile DJ who sings and plays sax, flute, and guitar, thinks his eponymous business based in Raynham is a little bit better or at least as good as last year's. As an instrumentalist and DJ, he's able to satisfy clients who want live music but can't afford a band.

During the busy spring and summer season, DJs often have to scramble. Hallisey has done 13 parties in a week, he says, "including a triple on one day. That beats you up." The DJs often have freelancers to call upon for help when a lot of clients are booked.

Weddings constitute 90 percent of Kebabjian's business. And the wedding genre is doing well.

"We have not really felt the economy as much," Kebabjian says, "because people are still getting married. They're still spending money. We do have clients who want to go with smaller packaging."

Unlike radio DJing or club DJing, these DJs cater to the happiness of their clients, which means they sometimes don't have the musical freedom their peers have. Some of Kebabjian's clients give him a list of songs and ask him not to stray from it. Others provide more latitude.

"The most successful weddings are when I'm given some direction but yet given the freedom," he says. "When I'm locked into a crowd and when I get into that groove, it's the most amazing feeling. The adrenaline flows, and I start playing from the heart. And when I do that you get the most amazing experience."