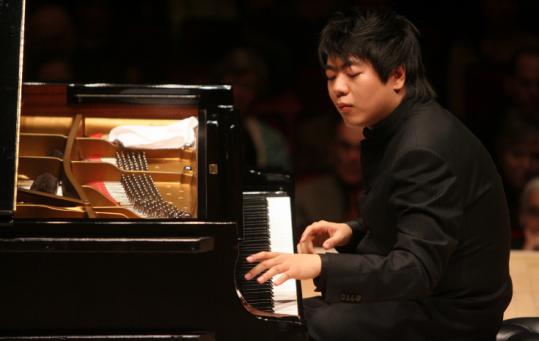 The Series of Boston lived up to its name in presenting a Symphony Hall recital by Lang Lang. While the 26-year-old Chinese pianist is well-known for more than simply, in Daniel Boorstin's famous formulation, his well-knownness, the cultivation of celebrity is a large and unapologetic part of Lang's career: His program biography gives his recordings and his signature Adidas sneakers equal billing. But much of Sunday's program made celebrity conspicuous by its absence, using the latitude of virtuoso fame to traverse more cerebral repertoire.

The first half, for example, was taken up by Franz Schubert's A-major Piano Sonata No. 20; like Schubert's other late sonatas, it's music of structural expanse rather than adrenalized excitement. Lang's approach was detailed and judicious, with a crisp, satiny tone, drawing phrases inward and upward. The control was uncanny - flawless, minute polish - but Schubert's long-range expressive arc never emerged amidst the emotionally cool repose.

After a change of pianos - German Steinway to American Steinway, pearls before spine - came the modernist fierceness of Bela Bartok's 1926 Piano Sonata, two exuberant, dissonant, percussive barrages surrounding a primeval-forest nocturne. Lang opened with blazing speed and thunderous power, and took off from there, letting up only for an eldritch slow movement. Lang's daredevil tendencies found a gratifying outlet.

If Lang's virtuoso reputation engendered dangerous fun in the Bartok, in seven of Claude Debussy's "Preludes," the music alone took center stage. Lang again returned to his fine, precision touch, but here it was joined by a sure feel for color and mood - the distant, whispered gravity of "La cathédrale engloutie," the translucent wash of "La terrasse des audiences du clair de lune," the dappled-sunlight ornamentation of "Bruyères." This was exceptional, exquisite pianism. (Lang's delicacy was often in danger of being swamped by waves of audience cellphone-and-coughing gaucherie.)

Lang Lang Superstar finally appeared in Frederic Chopin's op. 53 Polonaise, probably the composer's most familiar effort in that genre. It's a piece that can lend itself to sober interpretation, but this rendition had the fleeting, glittering energy of a celebrity encounter: impudent swing in place of martial tenacity, an insouciance toward the score that occasionally rose to cheerful blasphemy.

Star power is power all the same.

Presented by Celebrity Series of Boston