At NEC, six hours of Stockhausen 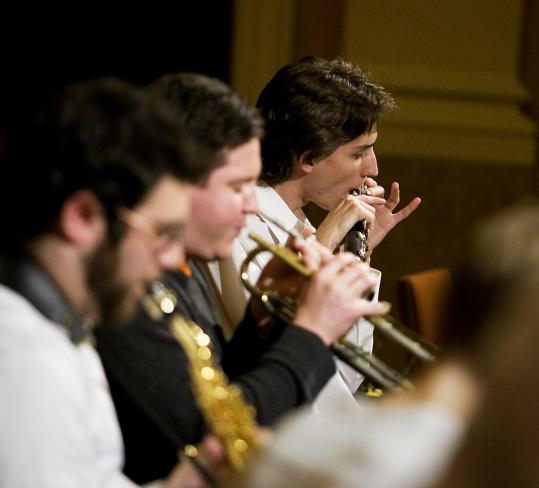 At just after 3 p.m. on a Sunday, Vic Rawlings begins to "play a rhythm in the vibration of his body." He's only following directions, those of the late German composer Karlheinz Stockhausen, whose "Verbindung" ("Connection") gives that instruction. What does it mean? Rawlings interprets it as a low guttural scrape across the tailpiece of an amplified cello.

As four other players join in, the noise progresses to musical sounds and back again. For the next six hours, pianist/director Stephen Drury's Callithumpian Consort, along with its student cadres, [nec] shivaree, survey most of the rest of Stockhausen's "intuitive music." The frameworks for extemporaneous performance are paragons of the far-out, avant-garde 1960s, but their amorphous, sometimes transcendental tone - "play a vibration in the rhythm of the universe," as "Verbindung" directs - have resulted in a repertoire more often talked about than actually heard.

Sunday's concert is a rare chance to take Stockhausen at his word: Even at his most esoteric, he always wrote music meant to be played. "Whenever we hear sound we are changed," he said. "We are no longer the same."

3:55 p.m. Drury joins nine other players for "Nachtmusik" ("Night Music"). A little history: In May of 1968, Stockhausen's second wife left him, and he fell into a deep depression, refusing to eat. Over a week, the hunger strike transformed with the aid of Stockhausen's only reading material, a book about the Bengali guru Sri Aurobindo, into a meditative fast, during which he wrote the 15 pieces collected as "Aus den Sieben Tagen" ("From the Seven Days").

Eschewing notes and rhythms and leaving the instrumentation open, Stockhausen produced short texts, somewhere between poetry and rubric. He had already experimented with improvisatory musical construction, but the romantic idea that it took a moment of crisis to show the new way forward somehow fits - for all his late-career mysticism, Stockhausen was as much in the singular-genius tradition as Beethoven or Wagner. (Appropriately, Sunday's realization of "Nachtmusik" rises to a grand, near-Wagnerian pitch.)

The concert ultimately comprises 21 pieces from "Aus den Sieben Tagen" and its 1968-70 sequel, "Für Kommende Zeiten" ("For Coming Times"). But two of the former's most autobiographical (and notorious) pieces are left out: "Oben und Unten" ("Over and Under"), a theater piece that alludes to Stockhausen's mother, killed by the Nazis; and "Goldstaub" ("Gold Dust"), which requires its players to first fast in isolation for four days - crazy, but also exactly what Stockhausen did to write it. Like much of his music, it combines radical audacity with the matter-of-fact literalness of a diary.

4:25 Eight players embark on "Übereinstimmung" ("Unanimity"), from "Für Kommende Zeiten," stabbing out seemingly random notes, an almost avian clamor. Much of the day might inspire the criticism that "anybody could do that"; from a technical standpoint, the criticism would hold. But these are accomplished musicians: Is their intuition specifically musical? Maybe anybody could do it, but would they?

Nadia Boulanger famously said that one has to learn the rules in order to break them. But these players are following rules: Stockhausen's, unorthodox but specific.

Even the musicality sometimes seems external. One hears it as music only because Stockhausen is saying that it is. And yet, imposed or not, the resulting experience is compelling, bracing, and, at times, astonishingly beautiful.

5:05 "Über die Grenze" ("Across the Boundary") pushes into comic territory. Saxophonists Benjamin Sorrell and Eliot Gattegno (the latter honking on his instrument's detached crook) unleash a din of simian squeaks and yelps. Toward the end, Gattegno reassembles his saxophone for a bit of "Mary Had a Little Lamb." It's in keeping with the intent (Stockhausen instructs the player to imagine himself "a higher being" becoming a "Humorous Master-Interpreter" of his instrument) but it's the only moment of the day that seems to come from outside Stockhausen's modernist/mystical aesthetic.

The performances were no doubt historically informed - Stockhausen supervised recordings of the pieces - but even back then, trombonist Vinko Globokar insisted that his name be taken off the records, protesting Stockhausen's claim of sole composition. Still, at the very least, Stockhausen is the instigator. It's like British copyright notices: The right of Karlheinz Stockhausen to be identified as the author of this work is hereby asserted. You can disagree, but it's still Stockhausen whom you have to disagree with.

6:15 A septet plays "Es" ("It"), Stockhausen's most explicit channeling of mystical practices he hints at elsewhere. "As soon as you start to think, stop / and try and attain the state of NON-THINKING," he writes, "then continue playing." It's the m.o. of numerous meditative traditions throughout the world.

The performance is predictably sparse and serene, but that may just reflect the Western condition. More skilled meditative practitioners might produce busy, eventful music.

6:50 "Kommunion" ("Communion") begins, the players' brief motives amplified into canonic imitation via electronic reverb and feedback. Throughout the concert, Edgar Barroso has been in the balcony, electronically transforming live sounds into distorted noise, adding his own effects, layering it all back into the mix.

End results become raw materials; creation is not the same thing as control.

At times, the sound has a thunderous roar - literally playing up a storm. It's a touch of German romanticism - according to Schopenhauer, one path to the sublime is to "have before our eyes, on a large scale, the battle of the raging elements." Another way? To contemplate "the infinite greatness of the universe in space and time." (Play a vibration in the rhythm of the universe.)

7:25 Callithumpian wit appears in "Intensität" ("Intensity"), with its directive to "play single sounds / with such dedication / until you feel the warmth / that radiates from you." Percussionist John Andress's single sound is the warmth-inducing jingle of a cocktail shaker.

The piece also displays the unpredictability of group intuition, at several points seeming to end, only to have flutist Anita Chandavarkar start it up again. (To be fair, Stockhausen instructs the group to "play on and sustain it / as long as you can".)

8:40 The 20 players still in the hall (a total of 34 have lent their talents on the day) unite for the concert's finale, "Setz die Segel zur Sonne" ("Set Sail for the Sun"): "slowly move your tone / until you arrive at complete harmony / and the whole sound turns to gold."

The group does not perform the last piece of "Aus den Sieben Tagen," "Ankunft" ("Arrival"). "Give up everything," it begins, "we were on the wrong track."

Does Stockhausen mean schematic practices of musical composition? Societal categorizations of music as craft rather than spiritual practice? Perhaps the European tradition itself - civilization's previous spasm had claimed both his parents, after all, and seemed on the verge of unraveling again.

On the other hand, lost in his own situation, Stockhausen wasn't even aware of the waves of revolutionary protest - riots and strikes sweeping through France - that broke the very week he wrote "Aus den Sieben Tagen."

The vibrations took precedence. "Begin with yourself," "Ankunft" continues: "you are a musician."