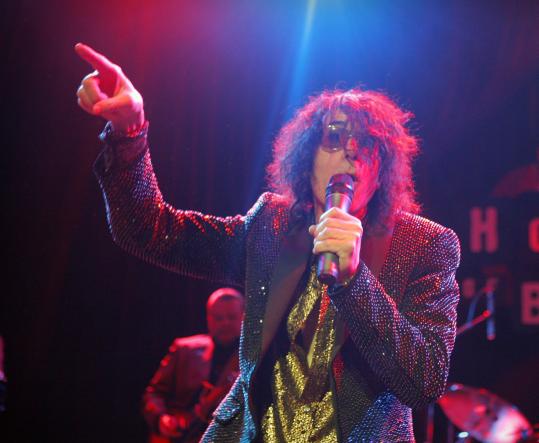 If you're going to have a housewarming party then it makes sense to invite a band that knows how to heat things up. The powers that be at the new House of Blues wisely prevailed upon one of Boston's greatest, the J. Geils Band, to officially christen the venue, and last night the rock and soul legends lacerated Lansdowne Street.

The group may be 10 years removed from its last proper reunion outing but for two hours and 10 minutes last night it felt like they'd scarcely taken a break. They slid effortlessly through their own considerable list of hits and a passel of blues and R&B covers that had the sold-out house of 2,400 howling.

Frontman Peter Wolf remains a bundle of energy and was in great gritty voice. Clad in his signature porkpie hat and a glittery black jacket, he rolled his hands and wiggled his legs through the swagger of "Sanctuary," the reggae froth of "Give it To Me," and the jive talking intro to "Must of Got Lost" like a man half his age. All that wriggling loosened his trousers as the night wore on; at one point he called out for a belt and several came flying onstage.

"We're doing this one on a wing and a prayer," announced Wolf before the familiar sing-sing organ riffs of "Freeze Frame" rang out. They made it through the evening with nary a misstep.

Deadline obligations meant an early departure but sources left behind at the show said big Geils hits such as "Centerfold" and "Love Stinks" along with covers such as Bobby Womack's "Looking for a Love" and the Supremes' "Where Did Our Love Go" sent the crowd even higher. Some groups may have gotten more fame and fortune but few throw a party like the J. Geils Band.

Well-liked local belter Andrea Gillis made the most of her moment in the spotlight churning out classic covers such as Ike and Tina Turner's "River Deep, Mountain High" during her opening set.

The scene
The House was rocking and a slew of folks came-a-knocking for the big party including House of Blues co-founder Dan Aykroyd. "I'm gonna listen to Magic Dick and learn something," said the actor, who took time to sign records outside the venue before the show. The former "Saturday Night Live" star, who will bring his own Blues Brothers to the nightclub for tomorrow night's grand opening celebration, was a low-key presence but definitely wanted to check out the Geils band. "I revere those guys," he said. Also spotted in the crowd reeling and rocking were comedian Steve Sweeney, former Boston guitarist Barry Goudreau and his Ernie and the Automatics bandmate, auto mogul Ernie Boch Jr., restaurateur Christopher Myers, Lycos founder Bob Davis, Live Nation honcho Don Law, and a bunch of guys sporting Magic Dick 'fros.
The venue
Anyone who remembers being forced to become a little too familiar with your neighbors at Avalon will be pleased at this far more spacious club. The floor is wider and graded with several steps and the stage is higher, offering much improved sightlines. On the second level, which is ringed by colorful folk art and several bars, the railings are a good spot, until the crowd becomes a few people deep and then you're better off on the floor. The seated balcony area on the third floor was for VIPs only last night, but the standing room on the sides offered great views as well. Most importantly, no matter where you were in the club the sound was clear and clean. There were several opening-night glitches, however, that will need to be worked out. Many fans stood in line in the freezing rain for over an hour to get in. And before the Geils band took the stage, several bathrooms were declared out of commission, creating long lines inside as well.