As technology advances, more artists are using live sampling to expand their sound 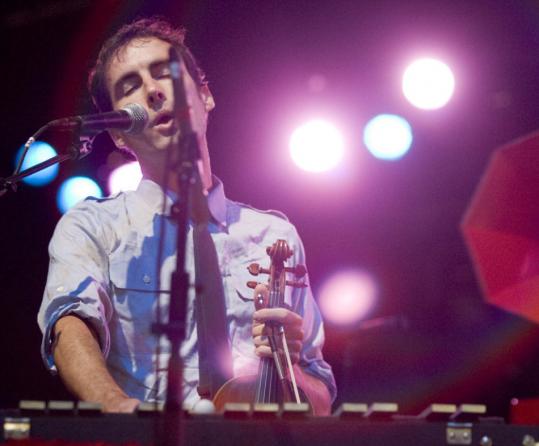 When performing alone, musicians like Andrew Bird (pictured) and Joseph Arthur record snippets of sounds to layer on top of one another for a full-band effect. (Erik Jacobs for The Boston Globe)
By Adam Conner-Simons Globe Correspondent / January 30, 2009
Text size – +

The life of a solo artist can be frustrating - just you and your instrument against the world. The audience doesn't dance, critics say all your songs sound the same, and there's no raging after-party. So how do you spice things up when you're on your own?

Increasingly, the answer lies in live looping. With a little bit of technology and a healthy dose of resourcefulness, performers ranging from soul singer Jamie Lidell to alt-pop artist Andrew Bird, who plays the Orpheum tonight, are constructing on-the-fly samples of overdubbed vocals, instruments, and percussion, laying them on top of one another to produce rich tapestries of sounds that transform their one-person road shows into expansive "full-band" experiences.

The process is simple: With a quick push of a button or pedal, a performer can record a brief clip that can then be played back indefinitely. Throughout the course of a song, musicians can add or erase elements at will, navigating a diverse mix of background vocals, guitar riffs, DIY percussion, and more. "It's so liberating to be able to build multiple 'me's' and let the audience see you create in real time," says pop-electronica artist Imogen Heap.

Musical looping itself isn't a novel concept: Composers have been manipulating recorded sound since the days of the gramophone. During the '60s, everyone from the Beatles ("Tomorrow Never Knows") to classical minimalist Terry Riley started experimenting with tape-loops to create intriguing delay and echo effects. But according to Rick Walker, founder of Santa Cruz's annual Y2K International Live Looping Festival, it wasn't until the mid-'90s that advances in technology allowed the practice of looping to flourish in a concert setting.

More than a decade later, the live looping movement has spawned dozens of festivals across the globe, a trade website (www.loopers-delight.com) that gets 1.3 million hits a month, and an increasingly visible community of practitioners that includes singer-songwriters KT Tunstall and Bon Iver, Icelandic pop star Bjork, and Argentine indie artist Juana Molina. "Even in just the last two years, the growth has been almost exponential," Walker says. "The technology has taken great leaps forward, and musicians have been more and more receptive to the idea."

Similar to other musical technologies, live looping can take many forms, extending into genres like ambient rock, hip-hop, even chamber music. More electronica-minded artists like Lidell and Heap employ laptop computers with special software like Looperlative and Ableton Live; guy-with-guitar types such as Joseph Arthur and Howie Day, on the other hand, pursue a more lo-fi vibe with simple loop-pedals.

Beyond its creative appeal, looping also lets singers bypass the pesky logistical and financial complications of dealing with bandmates. As Jamaica Plain-area guitarist David Kirkdorffer jokes: "With a pedal, nobody's ever late for rehearsal."

Tunstall, who still utilizes her loop-pedal on full-band tours, started live looping during her coffee-shop days when she couldn't afford to hire a rhythm section.

The artistic possibilities afforded by live looping also make it a tricky technology to master. The demands of assembling perfectly coordinated samples in real time give a live-looping concert a "terrifying spontaneity," according to Day. With all but the highest-end loop-pedals, one mistimed segment may result in having to re-record all the components on the spot in front of an audience - no small feat when the process of building up a track can easily take more than a minute.

Many musicians wouldn't have it any other way, though. "It's in uncertain moments like those," Joseph Arthur says, "when the elements of chaos spin you off in different directions than you ever expected." Pop-rocker Liam Finn's concerts find him frantically scampering up and down the stage laying down loops on a variety of drums and guitars. Heap fondly recalls a show in England last year when some technical difficulties led her to enlist the audience to sing along and become a "real-life human looping device."

Kirkdorffer, who has been live looping in Boston for nearly 20 years under the name Undo, says that the city's looping movement pales in comparison to its West Coast counterparts in Santa Cruz. For several years he organized festivals at the Middle East and other locales but has found that the traditional rock scene is not always supportive of the movement. "It's more about galleries and offbeat house parties," Kirkdorffer says. "At clubs, people think, 'How cute! When does the band start?' "

Indeed, despite its growing prominence, some loopers fear that the practice may get pigeonholed as a novelty act, like a street performer you might see at Faneuil Hall strumming "Hotel California" on his guitar with cymbals between his knees. "You don't want your audience to view it as a magic trick," says Bridgewater-based ambient musician Dennis Moser, who goes by the name usr/sbin. "It's important to use it as a performance technique rather than an end unto itself."