Frightened Rabbit takes to life on the road 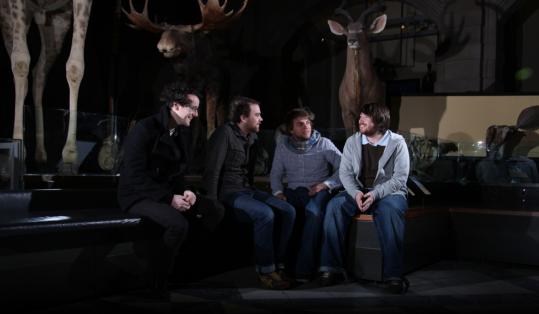 Frightened Rabbit may not be the most accurate animal persona for the Scottish indie-folk band that spent much of 2008 on the road promoting its sophomore release. Some sort of groundhog-owl hybrid would be more fitting, according to drummer Grant Hutchison.

"An owl-hog," he said. "We're wise people, and obviously with touring, we're up at night quite a lot. And touring can often feel a little bit like 'Groundhog Day.' So, a cross between a groundhog and an owl."

The deja-vu-inducing schedule (play, sleep, drive; play, sleep, drive) continues in 2009, including a stop by Hutchison and his Frightened Rabbit bandmates (including his older brother - lead singer, guitarist, and songwriter Scott) at Great Scott on Sunday.

The group's name came from Hutchison's mother, who used to refer to Scott this way.

"When my mum would take him to places where there were other kids and other parents . . . he didn't really like that sort of social situation and he would basically hide in a corner," Grant explained. "She always used to say he had the expression of a frightened rabbit whenever he was around other people.

"I was just as surprised as everyone else when he decided to start singing and writing songs."

Scott may have a self-assured presence onstage, but remnants of his childhood shyness are evident in his songs. The lyrics reveal insecurities ("You must be a masochist to love a modern leper on his last leg" he sings within the album's first minute) cushioned with addictively upbeat rhythms. His cracked, thick-accented voice calls to mind a Scottish Adam Duritz.

When they're not touring, the brothers, both in their mid-20s, live about 70 miles apart in Scotland - Grant in Glasgow and Scott at their parents' house in Selkirk. They're unassuming in person - and fond of hoodies and tattered sneakers - joshing good-naturedly and tossing insults back and forth backstage before a recent show in Brooklyn.

"It's nice to have someone in the band that you can kind of ritually annoy and take out all your anger on without having to really apologize," says Scott, who maintains creative control over band matters, even designing all the artwork for their albums and merchandise.

The band members hope to capitalize on the momentum they attained in 2008 beginning with the release of their critically hailed album "The Midnight Organ Fight" in April. By year's end, they had toured Europe with Death Cab for Cutie and had a song featured on an episode of "Grey's Anatomy."

"It's been a pretty hard year, just constantly on the road," Grant said, noting their parents' frequent complaint that they never send postcards. "But, you know, if I wasn't living in the back of a van being in a band I'd probably be selling meat and cold cheese for a living. So it's definitely better than that."