In raucous return to a tradition, everything old is fresh again 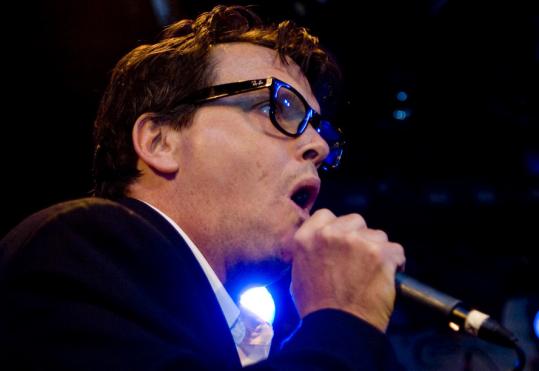 CAMBRIDGE - In an uncertain world, it's a comfort to know that hallowed holiday traditions like Christmas, for instance, or the Mighty Mighty Bosstones' "Hometown Throwdown," are reliable constants - unshakable truths in an ever-changing universe.

For a while there (four years, to be exact), even Boston's longest-running ska-punk band seemed a shaky proposition. But last year, after lying dormant as a live act since 2003, the Bosstones resuscitated themselves, and to absolutely no one's surprise, tickets have been snapped up to every show since.

Even the props, like audience loyalty and a decades-deep catalog of songs, remained the same. The keg-size black and white skin-tone Santa Claus lawn ornaments (one of each, presumably representing ska music's message of racial unity and harmony) that flanked either side of the Middle East stage Friday evening spoke symbolic volumes. So did Bosstones' frontman Dicky Barrett's trademark sunglasses at night, and his band's dress uniform of sharp suits and sharper rhythms.

Although - or perhaps, because - this was the first of a five-night, sold-out stand (the "Throwdown" concludes here tonight, then moves to Lupo's in Providence for New Year's Eve), the veteran outfit showed no signs of conserving energy or pacing itself for the long haul. Despite a brief bout of crowd surfing by the 44-year-old Barrett, who then remarked that he "used to do that when I was 18 - it's not such a great idea when you're middle-aged," both the boss and his fellow Bosstones looked and sounded frozen in a perpetually boisterous, perennially crowd-pleasing ska-core youth.

All the better to stave off the unsavory changes all around them, as outlined in the pugnacious opener, "I Want My City Back," which name-checked Storrow Drive and Central Square amid Barrett's bellicose lament that "this doesn't feel like my hometown." Luckily, there were plenty of old anthems to fondly remember, delivered exuberantly fast and jubilantly hard to restore order and reclaim one's sense of place: a punchy "The Rascal King" soon gave way to "Don't Worry Desmond Dekker," a fiercely heartfelt tribute to the late Jamaican reggae singer. Then came a cover of the Clash's "Rudie Can't Fail," a staccato symphony replete with Bo Diddley beat that joyously nodded toward the Bosstones' punk roots and record collections.

Another cover, this time of Stiff Little Fingers' ancient antiwar salvo, "Tin Soldiers," proved a particularly appropriate, and thoroughly current, commentary on the times we're living in. "We love the troops, but we hate the war," Barrett clarified before dedicating the tune to soldiers fighting overseas in far-flung places like Iraq and Afghanistan. In its own way, that tune too was a nod to tradition, however deadly and costly the custom may be.

LA-by-way-of-Lowell outfit Roll the Tanks opened the show with a spiky, if garden variety, pop-punk set before Boston's Westbound Train followed with an entrancing, deep-groove admixture of mellow rocksteady reggae.