The songs remain the same

Once passe, Christmas carolers are back, and striking a welcome note in the city 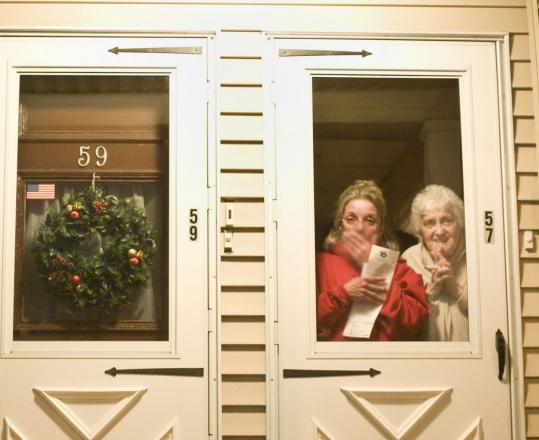 Carol Deady and her mother, Rose DeMattia, welcome a group in front of their home. (Wiqan Ang for The Boston Globe)
By James Reed Globe Staff / December 21, 2008
Text size – +

As shoppers bundled in pea coats and scarves whisked by a storefront on Newbury Street last weekend, a blend of voices stopped some of them cold.

On the front steps stood a quartet of singers dressed in Dickensian garb, clutching songbooks and looking like the kind of genteel folks who lead Freedom Trail tours. The refrains, rendered in four-part harmonies as crisp as the evening air, were familiar:

A young woman approached and tugged on her friend's coat sleeve: "Oh, look, they're singing . . ."

She paused just a second to find the right words. ". . . Christmas carols."

A few minutes later an elderly passerby fumbled through her purse. "I want a picture of this," she told her husband. "You never see this anymore."

No, you don't, but most everyone has an idea of what Christmas caroling is about. You've seen it in movies, probably know the songs by heart, and hum along to the versions incessantly piped into supermarkets and department stores.

"It's not by any means common," says Joel Sindelar, who leads caroling groups in Jamaica Plain, including today's fifth annual Boston Merry Christmas Caroling Mob. "And because people don't see them as much as they used to, it's doubly powerful when you carol these days."

This year in particular, caroling has hit home with folks who see the antiquated art form, which first rose to prominence in the 13th century, as a way to connect with their neighbors during these tough times.

Last weekend, the First Church in Boston hosted its annual caroling event that stretched from the Back Bay to Beacon Hill. The previous day, a group gathered at Mount Auburn Cemetery to sing carols as they strolled through the grounds, visiting the graves of some of the songs' authors such as Henry Wadsworth Longfellow.

Of course, caroling is often the butt of cheap jokes, dismissed as a hopelessly passe Christmas tradition. At least that was the message on television earlier this week. On Tuesday, Ellen DeGeneres took Britney Spears caroling in the Los Angeles suburbs for a segment on DeGeneres's show. Later that night, Jim Carrey, hamming it up as Elvis Presley, joined a gaggle of Victorian-attired carolers to entertain Jay Leno.

Some people take caroling quite seriously, though, especially professional singers who rely on it to make some extra cash this time of year. Unfortunately, the economic downturn means less work for some of them. Requests for caroling groups are down 35 percent this year, according to David Giessow, program coordinator for the Figgy Puddin' Carollers, which dispatches singers across the city.

Community spirits
For the casual caroler, it's all about the spirit of community. "Singing together is very grounding," Sindelar says. "When you have a group of people all working together through song, it can be really cathartic."

When door-to-door caroling, Sindelar says he often tries to scope out potential houses beforehand and leave a note to give the owners a heads-up. Aside from getting kicked out of the Ritz one year ("but then we went to the Four Seasons and they gave us hot chocolate"), Sindelar says almost everyone welcomes the carolers. "No one's ever slammed the door in our faces."

In fact, caroling usually takes people by surprise, for better or worse among skeptical New Englanders. Consider this police report printed in the Westwood Press in 1999: "At 8:40 p.m. on Sunday, Dec. 26, police received a report from a Strafford Road resident who said a large group of carolers was at her door. The resident asked police to send a cruiser to her home to check out the carolers."

Joan Ganon of Jamaica Plain had a much more festive reaction. She still remembers when Sindelar's group showed up at her holiday party a few years ago. Everyone had pretty much gone home, but then about 20 people appeared in front of her house, huddling together in the cold to serenade the stragglers. She was so touched that she invited the group back the next year.

"You can't help but be moved by all those voices singing those songs," she says. "It's music that, if you hear it anywhere outside a department store, is really beautiful. But I'm Jewish, so what do I know?"

She brings up a good point. Carols are inherently Christian, usually celebrating Christmas traditions, but often transcend their devotional origins.

"Almost regardless of the thematic content, the emotional nature of caroling tends to speak to people of all faiths," Sindelar says. "And it's also one of the few repertoires that everyone knows. One is Christmas carols; the other is the Beatles."

Pubs and politics
Sometimes the religious context is completely subverted in favor of a communal vibe. Earlier this month, Bruce Randall convened his annual caroling event in the back room of Doyle's pub in Jamaica Plain. Nearly 80 people showed up for what turned out to be more a party than a sacred service.

"We sat around, sang songs, drank beer, had dinner," Randall says. "Our event comes more from the tradition of pub carol singing in England." Predictably, he says, the singing got "a lot more rowdy" by the third and final hour.

Other groups have found new and decidedly more timely purposes for caroling. Last week Massachusetts Power Shift, a nonpartisan group of activists concerned with climate change, rallied its supporters to show their outrage - through song - to the government's potential bailout for the auto industry. "You are all cordially invited . . . to come join the MAPS Climate Choir for a round of delightful congressional climate caroling at the office of Rep. Barney Frank, chairman of the House Financial Services Committee and author of the potential auto bailout bill," read the e-mail invitation.

They tweaked a kid-friendly holiday classic to make a rather blunt point: "Rudolph the dying polar bear/ Had a dim future/ And if you ever saw him/ It would be a miracle."

Meanwhile, this past Tuesday, a grassroots organization called A.M.P. Collective (Activist Music for the People) tried a similar tactic with a rehearsal in Allston for a satirical caroling event: "Caroling for Consumerism."

But there are plenty of people who do honor caroling's original intent - and it's not just middle-aged friends and neighbors. Julian Koster, a 30-something indie-rock musician who recently released a beautiful new album called "The Singing Saw at Christmastime," has taken his caroling act across the country, armed with a banjo, an electric organ, and a saw named Badger.

He plays wherever people will have him - their homes, their offices, holiday parties. When he stopped in Cambridge two weeks ago, he entertained a group of Harvard students and their instructor, and then rushed to Somerville to regale a young woman whose parents had already gone to bed.

Still, caroling tends to work best in group settings. For the fifth straight year, John Olson gathered nearly 40 of his friends this past weekend for a caroling party around his Medford neighborhood. Like a lot of his fellow carolers, Olson is attracted to the camaraderie.

"It's a real gift you can give to the community," he says. "What's great about caroling is that it's really all about making the best sound together. It's not just about what you're doing on your own. You're working together, and that's unifying." 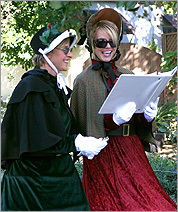 (Michael Rozman/Warner Bros. via AP) Ellen DeGeneres (left) and Britney Spears get into the old-time spirit and old-fashioned outfits for a caroling segment on DeGeneres's show.