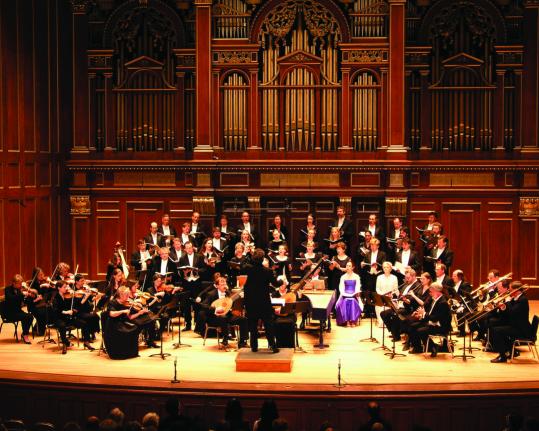 'Messiah" season is here; over the weekend, Boston Baroque mounted their annual reading, joining a herd that sometimes runs in such numbers that audiences should need hunting licenses. But Martin Pearlman and his group always produce a standout target.

The box-office-minded Handel would not have begrudged the overwhelming success of what is nevertheless one of his more odd creations; Charles Jennens's biblically derived libretto veers between pageant and theology with varying grace, like flipping between a Charlie Brown special and a Billy Graham revival. Handel binds it together with matter-of-fact musical grandeur, compositional skill, and venerable familiarity lending a sense of comfortable ceremony.

Boston Baroque's performance was relaxed and warm while, at the same time, sometimes astonishingly fast. "For unto us a child is born" dashed through its labors; in "All we like sheep," the chorus turned to their own way in dizzying roulades of centripetal force. (Pearlman's zippy pace in "And he shall purify" even seemed to momentarily catch the chorus off guard.) Both the 21-member chorus and the period-instrument ensemble (with Pearlman directing from the harpsichord) mixed lambent articulation with easy lilt; the music remained light on its feet, fleet rather than driven.

The soloists were uniformly stylish. Tenor Keith Jameson shone in the leadoff spot, with a bright and ringing timbre, pristine diction, and debonair phrasing. Countertenor Alan Dornak's sweet, placid sound occasionally became pallid, especially down low, but he excelled in floridly gentle phrases, with limpid ornaments. Baritone Kevin Deas poured out a darkly spacious tone that was sometimes too rich for Handel's more minute coloratura, but his sonic presence sustained his sermonic arias. Soprano Tamara Matthews started with a delicate, veiled sound, perhaps trying to match a period-practice idea of the style; when she finally let her full voice bloom, it was a resounding, generous thing. If Dornak's ornamentation was the most intricate, Matthews's was the most extravagant, venturing joyously near the extravagant impropriety of opera. (Handel would have approved.)

The evening's momentum was underpinned by deft dramatic details: the strings' heightened enunciation in "The people who walked in darkness," contrasting lush slurs with softly alighting staccato; the choir's pared-down straight-tone on "Since by man came death," the better to then proclaim the resurrection with full-bore splendor. The group's long history with the piece has begat a combination of virtuosic dispatch and confident casualness, a "Messiah" of effervescence and amity. Boston Baroque's old favorite draws virtue from both ends of the phrase.