Milky Way prepares for a new place to shine

Standing in a bulldozed swath of mud amid the broken bricks and demolition debris at 284 Amory St. in Jamaica Plain, you might find it tough to envision the gleaming glass and polished wood floors destined to replace the rubble less than 17 weeks from now.

"This will be the main entrance," says Kathie Mainzer, co-owner of Bella Luna Restaurant and the Milky Way Lounge & Lanes, pointing proudly to a dark, cavernous maw of a room inside the sprawling business complex known as the Brewery. At the moment, the cave-like space is lit only by bare light bulbs. "You should have seen it three weeks ago," Mainzer says. "There was no ceiling."

A tentative grand opening date of April 1 is set for Mainzer and Carol Downs's new lounge and restaurant, which, after more than a decade as a Hyde Square neighborhood linchpin at 403-405 Centre St., is picking up stakes and moving about three-fourths of a mile to the Brookside neighborhood. The owners say a sharp increase in proposed annual rent at the old location - about 85 percent - made the move necessary.

Despite the presence of roughly 50 other thriving businesses at the 5-acre complex, formerly the home of the old Haffenreffer beer company, it's hard to believe what's in store: a chilled-out destination for great food and music with big glass windows, a handsome scrubbed brick facade, and an outdoor fountain and patio. Indoor attractions will include a dance floor, a sumptuous red granite bar, and possibly a vintage slot machine and Skee-Ball. (The Jamaica Plain Neighborhood Development Corporation, which owns the Brewery complex, is sharing the cost of the $750,000 renovation, Mainzer says.)

The most dramatic impending change to the Milky Way's identity, other than the new location, is what it won't have: bowling. The new 3,700-square-foot space (compared to 9,800 square feet at Centre Street) simply doesn't allow for it. What will remain the same are the free dance and music nights - everything from Latin jazz and hip-hop to underground garage rock and disco.

Ryan Sciaino, who goes by DJ Ghostdad and runs the Milky Way's dance parties every Thursday, acknowledges that "there may be a little bit of rebuilding to do as far as getting the crowd to come back every week."

But at least the sound system is making the move. "A lot of DJs look forward to playing on the Milky Way sound system," Sciaino says. "It's one of the best in the area, definitely."

As part of the transition process, the club plans to stage a New Orleans-style parade from Centre Street to the Brewery (which is a quick walk from the Stony Brook T station). The procession - a way of transferring "the energy and the spirit from the old location to the new location," Mainzer says - is planned for the Milky Way's 10th anniversary on March 22.

"It's important to have a ritual," Mainzer adds. "This is a big change, and people have celebrated so many special occasions [at the Milky Way] - whether it was gathering together after 9/11 or having their first date there or getting engaged. There are so many memories."

Over Sunday brunch at Bella Luna, Hyde Square residents Jay Rodgers, 28, and Meghan Hurley, 27, like a few other people, lamented the Milky Way's move from the neighborhood. "It's a cool place in a great neighborhood, and it's kind of sad to see it go," said Rodgers.

DJ Ghostdad insists there is no reason to be disheartened. "I'm amazed by the amount of people who still think that the Milky Way is closing or going away," he says. "I'm still correcting people, saying, 'We're just moving.' You might even hear the music when you get off the T."

Know about something cool on the local music scene? E-mail Jonathan Perry at roughgems@aol.com. 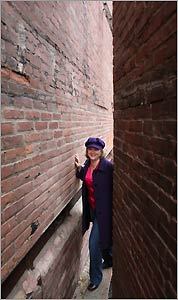 (Essdras M. Suarez/Globe Staff) Co-owner Kathie Mainzer is planning a parade from the old Milky Way site to the new one.

tomorrow (and every Saturday) with DJ Baby Boricua, starting with a free salsa lesson by

programming with live music from Doomstar, the Needy Visions, and

Coyote Kolb. All events begin at