A nod to Daniel Pinkham

All politics is local, a notable Bostonian once said. All music? Maybe not, what with jet-setting stars and nomadic conductors.

But another notable Bostonian, the late Daniel Pinkham, did his best to stimulate the domestic musical economy. Pinkham was an early and enthusiastic supporter of the Boston-based Florestan Recital Project, and now Florestan has returned the favor, recording a multi-CD edition of Pinkham's works for solo voice. On Sunday, the group celebrated the release of the first two volumes with a recital at King's Chapel, Pinkham's home base for more than 40 years.

The program drew from the release's second volume, sacred songs for voice and organ, with the chapel's current music director, Heinrich Christensen, at the manuals. In works encompassing five decades, the consistency of Pinkham's compositional personality was striking. Even the austere recitatives of 1965's "Letters From Saint Paul," which draw on 12-tone techniques, come out as quintessential Pinkham: serpentine harmonies, redolent with ear-tickling dissonance, but decisively tonal. In 1993's "Three Canticles From Luke," an extravagant triadic arpeggio on the words "salutare tuum" ("Thy salvation") might as well be a testament of musical faith.

The music at times bowed toward the town's psalm-book past: simple, verse-chorus forms and sturdy, clear syllabic melodies. But Pinkham's text-setting goes far beyond metrical stodginess, being flexible, playful, even a little jazzy sometimes, as in "The Wellesley Hills Psalm Book," quite a bit more than a little jazzy.

That virtue - clarity not just of text but also of its poetic flow - was exemplified by baritone Aaron Engebreth and tenor Joe Dan Harper, who divided the singing duties. Both showed elegant but absolutely articulate diction, a boon to music that puts the words front and center. Engebreth's warm, lyric voice caught the lyrical core of Pinkham's preaching. Harper's focused tenor was at its best in the sinuously expressive prose settings at the heart of "Carols and Cries," a 1990 cycle written, characteristically, for a group of soloists from the King's Chapel choir.

The concert was, most of all, fun - maybe an unusual epithet for sacred repertoire, but Pinkham was the sort who reserved his biggest, loudest effects for moments of joy, not terror. Whether setting the "Magnificat" with bright, Poulenc-like effervescence, spinning a whirling reel around Robert Herrick's heavenly vision of "The Isle of Dreams," or ending the 150th Psalm on an extroverted big-band chord, Pinkham never let the devil have the best tunes. 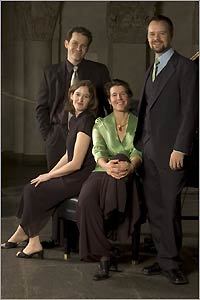