For those who flat-out rock we salute you

AC/DC is the greatest band ever. Here's why. 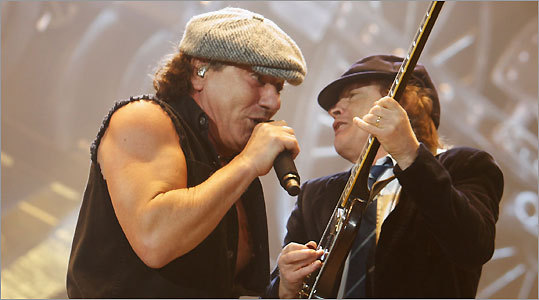 I remember the cannons. It was 1985. I had braces, a challenged complexion, and not a single date on my resume. But Pete Woodward and I had tickets to see AC/DC at the Worcester Centrum and we were wicked psyched. My mom dropped us off at the front door. She did not shout "Don't do drugs," a la Frances McDormand in "Almost Famous." And there was no reason to.

I'm not sure I could have handled a bag of Pop Rocks at that point. Entering that arena felt like taking a rocket ship to Mars. The smells, the T-shirts, the babes in spandex. Then the house lights went out and a single beam illuminated Angus Young, the pint-size guitar hero in a schoolboy uniform. He launched into the night's opening riff, and a sonic tidal wave swept through the arena.

It was the final encore that sealed the deal. "For Those About to Rock (We Salute You)" has perhaps the greatest opening buildup in rock history. No wonder they play it at Patriots games to juice up pre-kickoff crowds. At my concert, the prop cannons emerged to explode when singer Brian Johnson shouted "Fire!"

In the years since, I've seen Johnny Cash on his knees pleading with Jesus for forgiveness through song, Brian Wilson hitting the high notes on "Pet Sounds," and Sonny Rollins cutting left, right, everywhere on a seemingly endless riff. But I'm not sure I have ever felt as excited by music as I did on Sept. 6, 1985.

I bring this up because I'm lis tening to AC/DC's new album in anticipation of Sunday's sold-out show at the Garden. From the opening chords of "Black Ice," I'm struck by how much it sounds like everything the band has put out. And that's a good thing.

It is why, in a world with so much in flux - the stock market, the music industry, newspapers - I am ready to make my declaration: AC/DC is the greatest band ever.

What makes it great is not innovation or even sheer talent. It is discipline. The Aussie rockers learned to do one thing well: make hard, blues-driven rock. Instead of trying to branch out, they've stuck to their strength.

As bassist Cliff Williams tells Rolling Stone in a new cover story, he plays "the same thing in every song, for the most part. In AC/DC's music, the song is more important than any individual bit of it."

This band doesn't get trendy. No skinny ties in the early '80s, no girlish makeup in the hair band era, no flannel when Nirvana grunged up the charts. Why bother? AC/DC doesn't need to pander or strike a pose. Consider that "Ballbreaker," the band's lone album with super-producer Rick Rubin, wouldn't even make my personal AC/DC top 10. Rubin revived the careers of Cash, Tom Petty, and Neil Diamond. But AC/DC didn't need another hero. It was doing just fine. The band proved that again when "Black Ice" debuted at No. 1 last month, even though it is being sold only at and on ACDC.com. Imagine if you could download the album.

It is almost as if AC/DC operates outside music industry rules. Consider my begging for an interview. No matter how hard I tried, I was told that the group would not talk. Even if I were writing a piece that raved about its brilliance.

But wait. I want to stop right here to declare my love for Angus.

It goes without saying that in hard rock, the lead guitarist is important. And I'm sure you've heard of the heroic ax-men named Keith Richards, Jimmy Page, and Eddie Van Halen. Now consider whether any of these guys are the undisputed leaders of their bands. No. See, Angus doesn't just play solos. He is the solo. Somehow, at 53, he can still wear that schoolboy uniform and come off as a rock king. It is Angus featured alone on many of the band's album covers. It is Angus who turns dropping your pants during a show into a tradition. It is Angus who fascinated me as a child. I still remember being amazed that the man prancing, bobbing, and whirling onstage didn't drink. At least not booze. Angus liked tea.

And so much flows through Angus. Spiritually, that schoolboy uniform connects to the fantastically juvenile and potentially tasteless material that makes up so much of AC/DC's catalog. This is a group that never gets tired of double entendres. When you're 14, is there anything funnier than "Big Balls"? Same goes for "Givin' the Dog a Bone" and "The Jack," the latter Australian slang for a sexually transmitted disease.

Angus is also, I think, the reason AC/DC managed to do something no other band has done. It got a new lead singer without creating any dissension in the fan base. Bon Scott wailed away through much of the 1970s until the band's breakthrough, "Highway to Hell." But Bon liked to drink and, in 1979, he died after drinking too much.

What other band - and we mean you, Queen, Journey, and the Cars - survived and thrived after replacing its lead singer? Yet AC/DC came through with Johnson on 1980's "Back in Black," creating a seamless flow from earlier records. There are no separate camps, no kind of David Lee Roth vs. Sammy Hagar situation, only an intense love for both Bon and Brian.

When I go to Sunday's show, I will not have seen AC/DC for 23 years. I'll have a slightly better seat than in 1985 and won't have to meet my mom after the encore. But I do hold out hope that when the lights go down, and the music plays, the concert itself will be nothing short of a time machine. Because when they kick into "For Those About to Rock (We Salute You)," I'll be pumping my fist and hoping that somewhere after the guitar solo, Brian Johnson will yell "Fire."