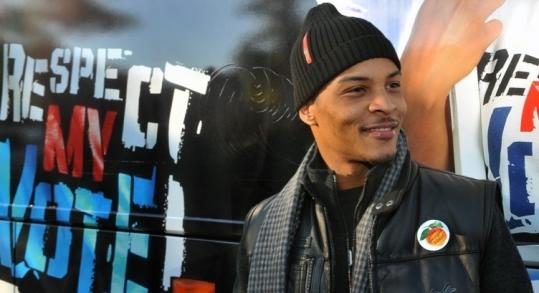 McDONOUGH, Ga. - T.I. originally thought his voting privileges were revoked as a convicted felon, until he researched and learned that under a Georgia law felons are eligible if they're not currently serving probation or a prison sentence.

"It's a relief," said the best-selling rapper, who stood in line for about 10 minutes yesterday before entering a polling center in suburban Atlanta to vote for the first time in his life. "This is what it is all about, not staying up late and waking up early to vote," he added. "Now rather than just talking about it, I'm being about it. I'm leading by example, and it makes me feel a lot better."

T.I., who already has two No. 1 hits off his new album, "Paper Trail," has several federal firearms offenses and ongoing community service endeavors, stemming from his arrest last October for trying to buy automatic weapons. But his lawyer, Steve Sadow, confirmed that he can still cast a ballot because his sentence doesn't start until late March 2009.

"Until he is sentenced in the federal case, he doesn't have a conviction yet," said Sadow of his 28-year-old client, whose real name is Clifford Harris. "Even though he is a convicted felon, he has a right to vote since he is not serving probation and hasn't started his prison sentence."

A Georgia Secretary of State's office spokesman confirmed that T.I. was eligible to vote.

With an "I'm a Georgia Voter" sticker on his black vest, T.I., signed autographs and took photos with several fans as he stood in line to vote.

"It's inspirational what he is doing," said Nathirya Brown, 19, a first-time voter who spotted T.I. stepping off his "Respect My Vote" campaign bus. He and the nonpartisan group Hip-Hop Caucus launched a nationwide tour in late July to encourage voters between the ages of 18 and 29 to take a more active role in politics. "Just him being diligent enough helps others find out their status as well," Brown added.