Amid personal storm, a show of force 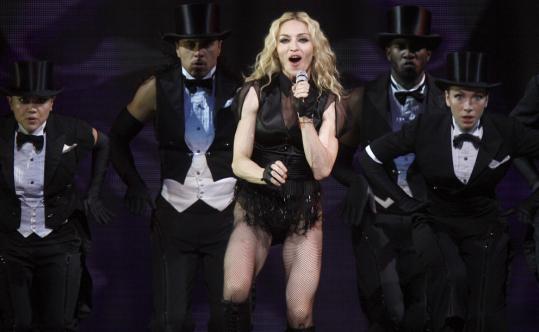 Yesterday was not, by all accounts, Madonna's day. Her publicists confirmed her eight-year marriage to Guy Ritchie had hit the skids. Blogs were abuzz with renewed rumors that she's dating A-Rod. Her Boston fans worried aloud on their Facebook pages that her tour might be in jeopardy. And even the high-minded BBC went crazy with continuous coverage of her divorce bombshell.

Everyone was worked up about Madonna's latest drama. Well, everyone except Madonna.

In an act of defiance at the TD Banknorth Garden last night, Madonna went on with the sold-out show (which continues tonight) just as expected. She made it clear that 25 years of being a provocateur has taught her this: Madonna will let you know when she's in crisis mode, and last night was not the occasion.

No mention of the divorce. No catch in her voice when she sang the heartbreaking ballad "You Must Love Me," surrounded by a quintet of acoustic musicians. If you read between the lines, maybe you picked up on something in her preface to "Miles Away," which she has claimed Ritchie inspired. "This song is for the emotionally retarded," she said. "Maybe you know some people who fall into that category. I know I do."

Otherwise, it was business as usual, starting with a DJ whose opening set rumbled out of the speakers with a mash-up of Madonna's "Give It 2 Me."

Madonna is on tour for her latest album, "Hard Candy," but make no mistake about her sweet goods. "My sugar is raw," she declared.

True to her penchant for change, she revamped the classics to mixed results. "Borderline," put on a strict diet of electric guitar and serious attitude, lost its infectious heartbeat. "Hung Up," with Madonna admirably attempting some guitar distortion, suffered the same grinding fate.

She redeemed herself earlier with "La Isla Bonita," this time reimagined as a pan-world celebration with Romanian gypsy musicians, flamenco dancers, and break-dancing. "Into the Groove" morphed into a joyful Bronx block party from the '80s, replete with Keith Haring images on the jumbo screens, double-dutch jump-roping, and barrettes in Madonna's hair.

For everyone who criticizes Madonna for her impossibly taut physique, there's a reason she has that body: this tour. The show is punishing in its choreography, but Madonna pulled it off in an unexpected way. Twenty years ago, when Madonna writhed onstage, you wanted her, fantasized about her. Now she's 50, face down and dry-humping nothing in particular, but the sexual desire has given way mostly to an admiration of her stamina and longevity. Madonna, ever fabulous, reminds us that we really should spend another hour at the gym tomorrow morning.

As usual, her stage production was a marvel, mechanical in its efficiency and thrilling in its lighting and visuals. She swore she was laying off the Sarah Palin jokes, but then images of John McCain and Mike Huckabee flashed on the screen during "Get Stupid." Later, Barack Obama's smiling mug appeared to a swell of audience applause.

After two exhausting hours, Madonna closed exactly how she began - with "Give It 2 Me." Given the day's bad news, the chorus felt like a mantra for a maverick career spent in the trenches. It left you feeling either happy or terribly sad for Madonna: "When the lights go down and there's no one left/ I can go on and on and on."