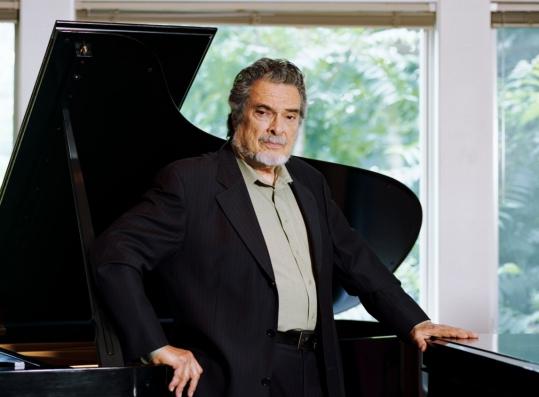 The story of Leon Fleisher is, by now, well known: the piano prodigy who debuted with the New York Philharmonic at age 16 in 1944; the mid-century series of indelible recordings with George Szell and the Cleveland Orchestra; the 1965 retirement owing to the immobilizing injury of his right hand; the heroic soldiering on as conductor, teacher, and interpreter of the left-hand repertoire; and, most recently, the miraculous recovery of his right hand's mobility and return to two-handed playing.

To begin, Fleisher played Egon Petri's arrangement of J.S. Bach's "Sheep May Safely Graze," from Cantata No. 208. In his hands, Bach's peaceful pastoral flowed serenely as a country creek, yet it welled with tenderness.

Next, Bronfman played Robert Schumann's Arabeske in C Major (Op. 18). His virtuosity was evident from the swirling, vigorous opening, but even more impressive was the thoughtful spontaneity with which he played the piece's quieter sections.

Fleisher returned, joined by Biss, for Franz Schubert's Fantasie in F Minor, D. 940, for four hands. The two were seated side by side; Fleisher manned the keyboard's lower register, Biss its higher. They played the rambling piece with striking unity, retaining clarity through even the densest thickets of notes.

Next, Bronfman replaced Biss at the keys for three selections from Antonin Dvorak's Slavonic Dances (Op. 46 and Op. 72). At first, playing the jaunty, slippery "No. 3," Fleisher did not mesh as seamlessly with Bronfman as with Biss, but the two were gloriously in synch by the time they attacked the furious "No. 8."

The second half opened with Jacobson Fleisher's reading of Mozart's Rondo in A Minor, K.51, which, lacking in momentum, seemed a static frieze of notes against silence. Next, Biss performed Beethoven's Piano Sonata No. 27 in E Minor (Op. 90). He gave shape to individual passages with refined technique and admirably flexible dynamics and pulse, but the parts failed to cohere as a whole.

For the finale, Maurice Ravel's "La Valse," Fleisher again took his post at the piano's left hand keys, with Jacobson Fleisher to his right. Over Fleisher's ominous rumbling, Jacobson Fleisher handsomely rendered Ravel's frantic Viennese waltz theme. The piece's thundering conclusion sparked the audience's hearty ovation for the concert and, above all, for the remarkable man at its center.