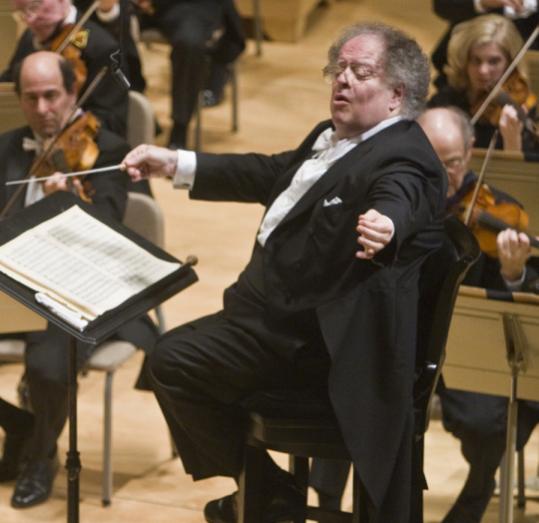 Having missed most of the Tanglewood season because of surgery to remove what proved to be a cancerous tumor, James Levine returned to conducting earlier this month at the Metropolitan Opera, leading a performance of the Verdi Requiem in memory of Luciano Pavarotti. On Friday he conducted the Boston Symphony Orchestra in Brahms's "German Requiem," the second program of the orchestra's season. The confluence of these two revered memorial works so close to his own life-changing event was eerie.

Yet anyone who expected that it would translate into music-making of self-referential sentimentality was mistaken. Instead, Friday's performance, while affecting, was also vital and dynamic. This requiem felt less like a memorial and more like a testament to life's beauty.

That is partly due to the piece itself, for which Brahms forsook the Latin requiem mass and selected his own Biblical texts. What he crafted was a piece less concerned with judgment and death than with consoling those left behind. "Blessed are they that mourn" are its first words, surrounded by music of almost unparalleled warmth and tenderness. The same music returns in the seventh and final movement, whose main text is "Blessed are the dead which die in the Lord."

From the beginning of Friday's performance, Levine had his left hand outstretched toward the orchestra and the Tanglewood Festival Chorus, seemingly asking for more - more warmth, more intensity. Both heeded his call.

He also organized the musical details beautifully. The first movement, in which the violins do not play, has a unique sonic texture, and Levine allowed each instrumental line to emerge clearly from the dark palette. The large, multipart movements unfolded with a keen sense of dramatic shape, while the smaller ones were dispatched with consistent momentum. Balances between chorus and orchestra were close to ideal.

Both vocal soloists were capable; neither was a standout. Michael Volle brought a dark, hooded sound and an awareness of textual detail to his solos in the third and sixth movements. Soprano Christine Schäfer's voice had a lustrous, rounded tone which seemed oddly matched to the ethereal fifth movement.

The real star of the evening was the chorus. Many groups sing this piece; few do so with the depth, precision, and focused sound the TFC marshaled. They made it seem effortless at the opening and showed remarkably little strain by the end. Through their voices emerged the interplay between death and life that lies at the core of this great work.