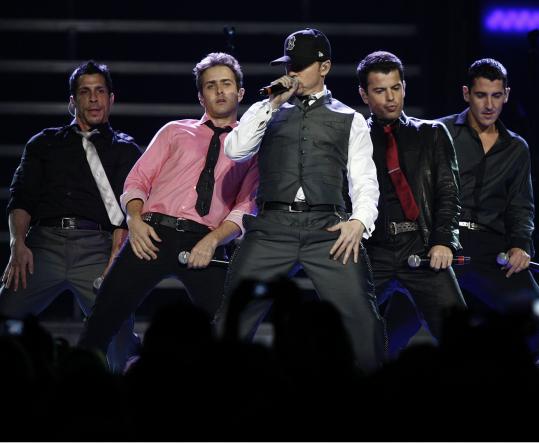 The New Kids on the Block may be old enough to have fathered the Jonas Brothers, but members of the recently-reunited Boston boy band, who played to a sold-out crowd of 13,360 at the TD Banknorth Garden last night, proved that they can sing in harmony and kick their legs from side-to-side with as much energy and charm as they did 15 years ago.

Taking themselves just seriously enough, the now 35- to 39-year-old Kids, who sold more than 70 million albums before they called it quits in 1994, energetically danced and sang through two hours of new material and now 20-year-old classics like "I'll Be Loving You (Forever)." There were costume changes, unbuttoned shirts, frequent nods to the Celtics, and talk of the years spent rehearsing in Jordan and Jonathan Knight's basement.

Ringleader Donnie Wahlberg, who sported a cap with a sparkling "B" for much of the night, fought tears as he told the crowd he was at a loss for words for the "appropriate thing to say to this beautiful city."

The Garden was more than ready for Wahlberg's love-in. Many of the fans, who were mostly women between the ages of 28 and 40, came to the show in 20-year-old T-shirts and buttons, and held signs that said things like "Before there was Justin there was Jordan," and "Donnie and Jordan in '08."

The crowd took well to tracks from the new album "The Block," specifically "Single," "Click Click Click," and "Summertime," but they got out of their seats, arms in the air, for the classics.

"You Got It (The Right Stuff)" produced prolonged high-pitched screams, and Joey McIntyre's ballad "Please Don't Go Girl" had a few female fans re-pledging their love, screaming, "I'll marry you Joey," despite the fact that they were wearing wedding rings.

But the show was more than just nostalgia. As it turns out, the Kids are surprisingly polished. At 38, Jordan Knight still has a crisp falsetto, and Joey Mac's voice is sexier 20 years past puberty.

Unlike other reunion tours (the Police included), NKOTB performed like a group that re-entered the scene for more than just a padding for retirement. The men giggled and grinned. They did the Roger Rabbit. They showered the crowd with countless "thank you"s.

Usually during a Garden encore, at least some of the concert crowd makes an early run for the exits, but almost no one left during "Hangin' Tough," which had the men doing the New Kids dance in Celtics jerseys. The song ended with Wahlberg welcoming Paul Pierce to the stage to show off the C's shiny, gold championship trophy.

Opening the show with a short set was R&B singer Colby O'Donis, followed by happy popster Natasha Bedingfield, who performed radio singles such as "Pocketful of Sunshine" and "Unwritten."

Bedingfield looked very Debbie Harry with tight pants and a new-wave hairdo, but she didn't have the vocal chops or the stage presence to fill the Garden. The British singer did tell the crowd that Boston is one of the best cities in the United States and that it certainly has the best basketball team in the world.

It seems the New Kids have taught her something.

New Kids on the Block