Against the Institute of Contemporary Art's glass-wall harbor view backdrop, the Ditson Festival of Contemporary Music ended Sunday afternoon with Gil Rose, the festival's artistic director, conducting his own ensemble, the Boston Modern Orchestra Project. The program, on the surface, was mostly dedicated to a mainstream brand of new classical music not too crazy, not too dogmatic. But even this roster showed how varied and polyphonic the "contemporary" category has become.

In one way or another, every piece referred to musical history; the first half's trio of works made a particular point of it. The oldest, Harold Shapero's vigorously neoclassic 1948 Sinfonia in C minor, opened the concert in a slightly ragged but enthusiastic performance. Modeled after Haydn and Beethoven, the Sinfonia, with its jabbing offbeats and edgy orchestration, pulls off a neat historical slingshot, reaching back in time to hurl itself into the present.

In contrast, Paul Moravec's 2000 "Montserrat," a cello concerto steeped in borrowed past authority (a tribute to Casals, with a main motive borrowed from plainchant by way of Monteverdi), didn't seem to have much purpose beyond a lengthy satisfaction in its own neo-Romantic, anti-modernist vocabulary. Soloist Matt Haimovitz, who performed a solo recital earlier in the day, brought verve to generic virtuosic passagework, but couldn't redeem the music's impersonal nostalgia.

The concert's second half demonstrated the virtues of craftsmanship. The orchestra reprised Leon Kirchner's 1955 "Toccata" from its January concert; drawing on older classical and expressionist templates, the formal tautness and vibrant instrumental writing keeps the focus on the music's power rather than its pedigree.

Another premiere, Andy Vores's "Two Fabrications" - two movements from a 32-part collection for various ensembles - was a winner, engaging and surprising. The title refers to what Vores calls each movement's "artifice," based around a single process or idea; the structural focus produces striking emotional immediacy. "Fabrication 11: Cast," inspired by a Richard Serra sculpture, revels in avant-garde instrumental techniques, assembling its sonic collection with a sure dramatic sense.

"Fabrication 13: Monster" mirrors a Caryl Churchill play that slowly infects itself with its own language. Vores spins a folkish, bright, off-balance reel that's gradually overtaken by its thumping punctuation, adding a haunting coda of pulsing blocks of harmony.

The concert closed with a fine, energetic reading of John Harbison's 2000 "Partita for Orchestra." Harbison is a stylistic eclectic, but his technical skill - especially in handling orchestration and dense harmony - maintains momentum and coherence. The music's intricate play may lack the exciting shock of extreme innovation, but provides ample pleasure through its confident expertise. It was a breezy finale for a festival demonstrating the manifold breadth now encompassed by the term "contemporary music," from costume drama to the cutting-edge. 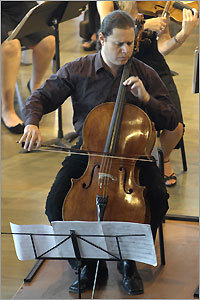 At: Institute of Contemporary Art, Sunday