A lighter pop from Sigur Rós

Sigur Rós, the Icelandic art-rock band known for its sprawling, otherworldly soundscapes, has just released an album that's startling not for its sweeping washes or dark enchantment, but for its happy pop songs. "Með suð í eyrum við spilum endalaust" ("With a buzz in our ears we play endlessly") builds on the group's recent experiments with sweetness and light by taking a giant step into the sun.

Sigur Rós plays a sold-out show tonight at the Pavilion, and last week drummer Orri Páll Dýrason took a break from washing the dishes at home in Reykjavík to chat about the power of change.

Q: Sigur Rós' new album is a departure in so many ways, from the tempos to the song structures to the whole mood of the collection. Can you talk generally about the inspiration for the music and this new direction?

A: The only thing we did talk about, the only rule we set, was to do it in a short period of time. I think it affected a lot. It was more energetic. Usually we're very lazy. Here we did the basic recordings in 10 days, working 12 hours a day. It was kind of an experiment.

Q: To me this album is the sound of falling in love. Did somebody in your band fall in love recently?

A: No, but we were all happy with our lives. Most of the songs we wrote in the countryside, drinking wine and cooking food and playing music with good friends.

Q: You recorded outside of Iceland for the first time, in New York, London, and Havana. Did you feel the need to get outside of your comfort zone?

A: Yeah, kind of. We have our own studio in Iceland, and we've done all of our previous albums there. We wanted to change. We'd been working in the same place and doing the same thing for eight or nine years.

Q: How did being in unfamiliar surroundings affect the process, or the final sound, of the recordings?

A: We were much more focused. We'd never done so much in so little time. We were doing nothing else. I think it worked out well.

Q: This was your first collaboration with the English producer Flood [best known for his work with U2 and Depeche Mode]. How much did he have to do with guiding Sigur Rós' music into more conventional song shapes?

A: He had ideas about structures. Maybe we should play this part three times instead of two times. But we were all working together.

Q: I've heard that things did not start out smoothly with Flood.

A: It started weirdly. He came to Iceland and spent a week with us here in a small rehearsal studio. We didn't know him then. He was talking about what we should do, and it was like having another member of the band suddenly. We found that very weird. Nothing came out of that week. He came back though, after we had written all the songs. We had to get to know him. He's a really clever guy.

Q: Another first on this album is a song in English. Why did you want to record a song with English lyrics?

A: Only 300,000 people understand Icelandic. Jónsi's [Birgisson, the lead singer] boyfriend is American, and at home they speak English. We tried more songs in English, but it didn't work. This is the only one.

A: Yes, sometimes it's blah blah blah, nonsense. When we make songs we don't have the lyrics, so he just uses his voice like another instrument. Most people think there has to be a story to be a meaning, but sometimes it doesn't need the lyrics. It's just music.

Q: I love the album's cover art, a photo of naked people running through a field. It really captures the feeling of the music. Have you had any trouble with censors?

A: In America they put a sticker over the bums. Did you see the video? That was censored on YouTube as well. We knew it would be.

Q: What's it like playing the new material in concert? 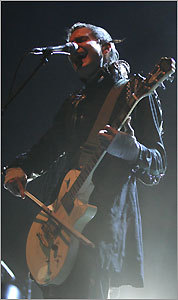